Challenges & Opportunities In The Agri Tech Sector – Is Blockchain The Answer? 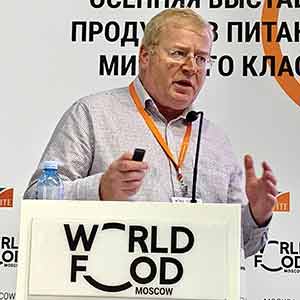 The global agri food sector looks to find ways of feeding a predicted world population of some 9 billion within a generation. There will be significant rise in consumers in Asia, Africa, and Latin America, in particular. The agri food sector faces major constraints that require: increases in productivity in the value chain and consistency of supply

• “resilience” in the supply chain to withstand volatility in international markets

• the better use of water in farming and food processing activities

• climate change, its impacts on primary production, and in some cases, the opportunity it will bring too

• the protection and enhancement of the environment

• labour availability around the world and the development of robotics at all stages of the supply chain, and more

• making best use of opportunities in the areas of digital data, economy, and more

“Agri tech” services and products can address all these challenges. This wide area of activity can literally cover all parts of the supply chain. With a global market opportunity estimated to be at some $400 bn, agri-tech is attracting attention from a wide range of players from across the supply chain. These range from small innovative startups, academic organisations, R & D houses—to the largest agri food multi-nationals in the sector. It is also drawing in non-traditional players too. Our own parent company, Genus plc, a major player in the global livestock genetic sector, is just one of these. They have invested considerably in the last few years on R & D spend in areas such as sexed semen, gene editing, genomics, disease resistance and bio sciences. Based on recent data, Genus invested some $90 mn in the last 12 months alone in these areas.

The list of potential agri tech type technologies that could be adopted is almost endless. Beyond availability, it is the selection of knock out technologies that is the real challenge. One of the areas that has attracted a good deal of attention to the agri food sector is that of blockchain technology—but which at the same time is still very much in its infancy. This is despite being first introduced in 2008 by Nakamoto as part of the explosion in interest in the Bitcoin market.

Despite the growing popularity of blockchain in agriculture and food, there is less certainty on how best it can be applied effectively. At its simplest, of course, blockchain is a distributed ledger technology which provides a connection of information from producer to consumer, which nobody can tamper with and everybody can see. In reality though, it is a bit more complicated than that. 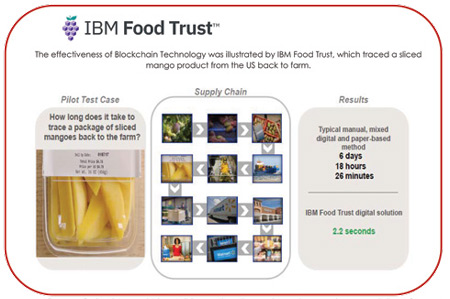 Current attempts to harness its uptake in the agricultural supply chain has been driven by its perceived benefits to increase trust, traceability, improve food safety and also reduce administration time. The whole issue of trust in the supply chain between farmers, processors and major retailers/foodservice companies has long been a subject of scrutiny. Over the last 5 years, global market prices have been subject to extreme volatility. And globally, consumers are more concerned and interested to know exactly where their food is coming from. So far, so good for blockchain in the agri food supply chain, then.

Additionally, blockchain offers the potential of using smart contracts in the supply chain. Smart contracts record and execute contractual agreements directly between parties to the pre agreements made on the blockchain. They are automatically executed on the blockchain in real time. Blockchain increases transparency and helps track the product, literally, from farm to fork. This would be visible to all authorised people in real-time and the information can be trusted, as the data cannot be changed.

Blockchain technology in the agri food supply chain appears to be unconstrained by geography in its adoption. The U.S. seems to be leading the way, followed by China. This is based on research carried out by the global business advice firm, PwC. Interestingly, China has been projected to be the leader of blockchain use by 2023. As an example, in China, JD.com, uses blockchain for greater transparency to provide consumer ‘peace of mind about the quality and authenticity of their purchases’. To date, they have implemented blockchain technology across 700 brands and 50,000 products to reduce counterfeits and increase food safety. Other good examples of blockchain can be seen in India, Oceania, Europe and Japan. Which Territories are Seen as Blockchain Leaders? 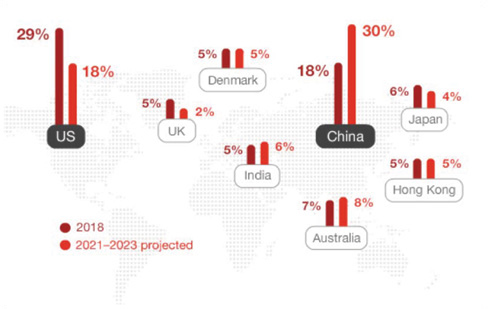 At this stage, the financial sector probably stands to gain the most from implementation of blockchain, followed by industrial products and the manufacturing sector, energy and utilities and then the healthcare sector. However, there is a growing interest from the food and agricultural supply chain driven from growing consumer demand and supply chain efficiency.

There are already some other great examples of blockchain being used in the food supply chain, including Cargill’s traceable turkeys (where people could text or enter an on-package code to access the farm’s location, view the family farm story, see photos and read a message from the farmer). Other firms known to be testing the technology include Tyson, Nestle, Driscoll’s, Co-Op, Sainsbury’s, Walmart, IBM, and Carrefour. All of these are significant players in the supply chain. They clearly see the opportunity and benefits that blockchain can bring.

The biggest barrier to adoption though still seems to be in the area of regulatory uncertainty and the potential failure of different blockchains to work together. It is clear that while the technology is still in its infancy, it could radically transform a supply chain. What is needed over time is for all parties involved to see the value in sharing data. Again, this has not historically been one of the strong points of the food supply chain. Those who have held the most information have also held the most power but as once famously said by a leading USDA economist, “the market works best when the information flows free-est”.

Blockchain applications appear to be here to stay in the agri food supply chain and the early adopters have already laid down a marker on their potential use. There is a plethora of other agri tech type technologies to select from too in order to meet the challenges the world food system faces. Who manages to do this in the most timely and effective manner will be the winners in the long term. This is as we move towards a very different sort of agri food system in the future. This will be based on where trade is more global, more connected to consumers and with greater than ever before emphasis on the whole issue of developing sustainable and traceable supply chains.