Google Gets its Foot in the Door of Quantum Computing

Google Gets its Foot in the Door of Quantum Computing 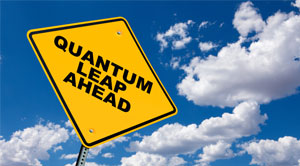 FREMONT, CA: Google has moved one step ahead in realizing a computing platform based on quantum mechanical effects. The company has announced that they were able to solve the errors in calculations in the quantum computing by adding more qubits. Albeit they were not able to evade the errors from occurring, the new capability to annul the errors is enough to get the adrenalin pumping for the researchers working on the project.

Unlike the traditional digital computer that works on the binary values (bits) 0 and 1, a quantum computer can take several values (quantum bits or qubits) when they attain a state called ‘superposition state’. The quantum computer works much faster to the traditional digital computer and as such holds great value in solving the real-world problems through greater computation capabilities.

One of the many challenges in the path to realize a quantum computer is that the qubits lose their state more often than not. This loss can be due to heat or other disturbances resulting in distorted quantum states which hamper the entire computation process.

As a positive step which can be considered no less than a milestone, researchers at Google and the University of California, Santa Barbara, mention that they were successful in creating an error-correction system that stabilized a fragile array of nine qubits. Additional qubits were introduced to observe the state of the computing qubits without affecting their state.

“We have for the first time in the long history of quantum computing an actual device, where we can test all of our ideas about error detection,” said Rami Barends, a quantum electronics engineer at Google and one of the authors of the paper, reports John Markoff from The New York Times.

The findings of the research so far in quantum computing show that the problem around losing information (qubits) can be addressed by adding more qubits. The researchers can now extend this approach to handling bigger computations.

Many Irons in the Fire

Well it’s not just Google who is obsessed with quantum computing, but companies including IBM and the Microsoft have also taken quantum computing initiatives. It would be interesting to see who in the end could finally bring the first operational quantum computer into being.