How Facebook's Wedge will Impact the Legacy Switch Market 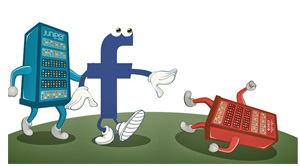 Disaggregation is the theme of the present networking industry, which is experiencing a booming impulse of disintegrating conventional data center technologies into core components that are more scalable and flexible. This impulse got an unforeseen jolt from Social networking company–Facebook who stepped into the networking precinct by commencing Open Compute Project (OCP), a community of technology leaders who would uncap the cask of IT infrastructure industry to achieve greater choice, customization, and cost savings.

OCP kicked off with a new networking project with an objective of desegregating hardware and software and developing designs for top-of-rock (TOR) switches. This initiative resulted in the cosmos of Facebook’s own TOR switch, code-named ‘Wedge’ and a new Linux-based OS for that switch, code-named ‘FBOSS’. This twain breaks down the hardware and software modules together in new ways to provide a next-generation experience in operating thousands of servers in data centers.

Unlike traditional switches, Wedge provides the same flexibility and power as a server, to simplify the management of software development. Any user can replace any components, and alter the design to meet their specific needs. For instance, the user could replace an Intel-based microserver with an ARM-based microserver. Facebook has leveraged its existing “Group Hug” architecture for modular microservers, for designing and implementing the switches. It enables Facebook to use a wide range of microservers from across the open hardware domain. The social giant has also adopted a unique approach ‘Treating a switch like a server’ that allow users to bring switches into their distributed fleet management systems and provision the switch with their desired application specific OS. This enables the user to control, deploy, and monitor the systems alongside servers and storage. Successively, engineers can focus more on contributing new capabilities to the network and less on managing existing systems.

On the software side, FBOSS, just like its cousin Wedge, is different from most of the existing network software. FBOSS is a set of applications that can be run on a standard Linux OS to control and manage network switches. Tracing the ‘Treating a switch like a server’ approach, using FBOSS, users can deploy a set of applications supporting big-data style computations onto certain tiers of servers, simultaneously deploying packages like proxygen onto servers in web tiers. FBOSS gives users the power to choose certain pieces of the application, and build different applications on top of it. Wedge and FBOSS are currently being tested on the Facebook’s network.

The upside for enterprises that choose Wedge is that they will be free from getting twisted in the cobwebs of supply chain. It is a long and ennui trip that a commercial switch experiences on its journey from fabrication to the data center rack. Using Wedge, enterprises can tackle and surpass hurdles such as software revisions, regression testing and re-stocking of the distribution and hardware maintenance channel.

Facebook is advancing towards open networking by encouraging a broad spectrum of open source software that can operate on the open hardware crafted by them. The company has freed itself from the restrictions of the conventional supply chain and the infliction of middlemen. Hereafter, many existing and new internet-scale organizations will follow the footsteps of Facebook and Google, and enter the switch market to achieve reduced cost and operational flexibility. Subsequently, the participants in this newfangled competition would need the development resources of a medium-sized vendor or integrator at their disposal to become successful in the market. This desegregated commoditization of network merchandise is inevitable and it will lead to lower operational costs for everyone in the market.