Is Hydrogen the Future of Clean Energy? 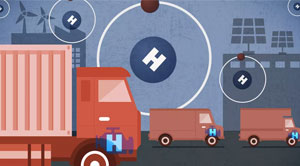 Hydrogen is the most abundantly found element in the World. Hydrogen produces zero to near zero carbon emissions when used for energy. Hydrogen can be considered as clean energy similar to electricity. It can be produced easily from domestic resources such as renewable energy and nuclear energy. Hydrogen will simultaneously reduce the dependence on fossil fuels reducing the emission of greenhouse gases and other pollutants. Hydrogen has to be manufactured as gas because it is lighter than air and raises high into the atmosphere. Natural hydrogen is associated with other elements like water, coal, and petroleum in compound form. Hydrogen gas, when compressed, can be easily stored and transported over long distances. It is considered clean energy as Hydrogen fuel cells generate electricity through a chemical reaction with oxygen in the air, and emit water and heat as the byproducts.

NASA has been using liquid hydrogen to propel the space shuttle and other rockets into orbit. Hydrogen fuel cells power the shuttle's electrical systems, producing pure water as a by-product which the astronauts use to drink.

Check This Out: Most promising Clean Tech Startups

Most hydrogen can also be produced through a high-temperature process in which steam reacts with a hydrocarbon fuel to produce hydrogen. This process is called steam methane reforming.

In most common hydrogen production called electrolysis, first water is collected into electrolyzer then oxygen and hydrogen molecules are separated from water.

Hydrogen can be produced using sunlight through the various process like photobiological, photoelectrochemical, photovoltaic-driven electrolysis, and solar thermochemical processes