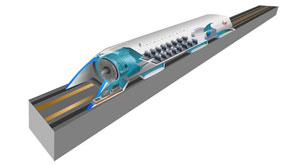 When Elon Musk, CEO of Tesla and SpaceX, published his famous white paper on hypothetical levitating train in a vacuum tube in August, 2013, the tech world was beaming with surprise and the internet was seething with fantasies of travelling from SF to LA in just 30 minutes. He gainsaid other companies and individuals to engage and develop the concept. Conceiving the idea of Hyperloop, Hyperloop One and Hyperloop Transportation Technologies were the first of the few to enter into the hyperloop arena.

Vying to bring the idea of Musk into existence, Hyperloop One built a 300 meter track in Nevada desert to propel 1,500 pound aluminum centipede sled in a propulsion open-air test. The trail run was a major success–116mph in 1.1 seconds.

“It’s real. It’s happening now,” said Rob Lloyd, CEO of Hyperloop One. A Hyperloop has the potential to whisk cargo as well as passengers in pods through a low pressure tube at speeds up to 750 miles per hour; faster than a conventional high speed train and commercial cargo or passenger air-liner. The rate of speed is predicted to surpass the speed of sound in the future. This transportation idea would be much cheaper, faster and more efficient, and could completely replace high speed rail projects. The initial applications can be held by implementing Hyperloop around ports, replacing trucks and trains that carry cargo from ship to factories and stores. Commercial cargo transportation feasibility studies conducted by Hyperloop One will undertake an effort to work on reduction of time and costs to optimum levels for freight companies. The startup has partnered with AECOM, GRID Logistics, and consulting partner KPMG to reduce traffic congestion, improve air quality and port efficiency for freight movements. Hyperloop One is also operating with Swiss industrial consortium cargo Sous terrain to develop a completely automated freight transportation system that will connect transport hubs in Switzerland. It has bagged $80 million Series-B funding which includes investment from the French national rail company SNCF.

Hyperloop will not only provide a fast and unparallel mode of transportation, but it will also determine and revolutionize the growth and evolution of existing cities. It will influence how the cities will be constructed and conceptualized. Numerous budding startups have envisioned designs for Hyperloop concept. Few designs incorporate a multi layer platform that allows for transporting automobiles and specific types of cargo.

Skeptics and critics remark that Hyperloop might turn out to be an ephemeral and impractical choice for long distance. Since, the experience of being shot through a tube for 30 minutes or longer without a view or not being able to get up from the seat, might not charm many people. This paves way for SCM, since cargo does not demand to be charmed. Cargo can be shoved in a pill and shot through a tube. Such high speeds require pods to be extraordinarily sealed, especially while considering transportation of humans; cargo shipments don’t demand extra protection, thus cargo can be viewed as a more favorable choice–at least a potential load for initial implementations. But the designs by Elon Musk–10fts length X 10fts diameter and Hyperloop One–8fts X 20-40fts long freight containers are no competition for an 18-wheeler semi trucks and conventional rail trains which can carry 80,000 pounds of cargo. When shipping enterprises speak with regard to expenditure, they deal in terms of costs per volume shipped.

With the present designs, cargo such as perishable items and organs for transplant can be transported from one city to another quickly. Food industry and medical industry can leverage this technology–at its current state of development. The technology could bring a drastic change in logistics and supply chain with further research and improved engineering and designs. Hyperloop provides perks like resistance from weather conditions and earthquake, less casualty prone method of cargo transport, little or no carbon emissions depending on the energy source, lesser construction cost compared to high speed trains and obviously, the speed.

“Hyperloop has the potential to solve many of today’s most complex long-distance transport issues,” said Gregory Hodkinson, Arup Group chairman, as reported by The Gaurdian. Arup Group is a prominent partner of Hyperloop One, currently working on London’s cross rail. “If railways helped enable the first industrial revolution, Hyperloop has the potential to do the same for the information economy, overcoming distances and creating connections between people, places, ideas and opportunities.”

With so many consortiums and investors hopping onto the Hyperloop bandwagon, the future of the transportation industry is looking promising and hopeful. The world needs more than just a functioning Hyperloop, it needs to be comfortable, affordable, and safer than the current modes of transport available and it needs to fetch ROI. Supposedly, if Hyperloop turns out be what has been promised, autonomous vehicles and jets would be long gone, replaced by capsules swishing through tubes.