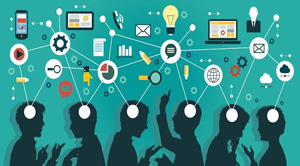 Big Data might be a relatively new term but not an entirely new concept. It has been around for millennia. Even in the Paleolithic age, the cavemen of Africa etched markings into bones or sticks to monitor their food supplies. Then came the abacus, the library of Alexandria, the Antikythera Mechanism (the world’s first computational device), and the list goes on. As time passed by, the art of data analysis or deduction evolved giving rise to new sciences and technologies– statistics, data storage, business intelligence, and data centers.

When the internet storm took over the human world in the latter part of the 20th century, analog storage systems made way for digital storage and cloud services. In another ten years or so, the total storage information processed in the world grew from 1.5 billion gigabytes to 9.57 zettabytes (9.57 trillion gigabytes to be specific). In the meantime, Wired gave a name to this vast ocean of information– Big Data, (quite undervalued if you ask me, how about Cosmic Data!). At the same time, something else also passed under the radar. It was Hadoop, an open source framework for Big Data analysis, developed by the Apache Software Foundation, the open source advocates. Soon, Hadoop was extensively adopted by businesses for two reasons; firstly, it was cost-efficient, secondly, it was fast.

Since then, open source has been the buzzword for Big Data analytics. But, what makes open source analytics platform attractive for enterprises even though there is no guarantee about security or the quality of the software?

In a highly competitive market, it is important for enterprises to be equipped with agile solutions. Open source projects are fast and agile. Agile software provides enterprises with the capability of “inspect and adapt” when a problem arises, thereby negating any risks that are hindering the organization’s growth. Reliance on commercial vendor software can often leave enterprises stranded if they do not possess a required feature. With open source software, IT developers in an enterprise can modify or alter the source code for obtaining any specific feature. Moreover, agile Big Data projects deliver real-time mission critical information for enterprises through an easily manageable and flexible platform. Another component of an agile ecosystem is technological flexibility which enables enterprises to draw insights from modern data sources like social media, clickstream data, e-mail conversations and more.

Enterprises usually adopt open source software for the sake of budget constraints. Compared to vendor software, open source projects are highly economical with services worth every penny spend by the enterprises during deployment and further development. Though an open source Big Data project is way more cost-effective than a commercial one, enterprises must be wary of some latent cost drivers such as custom development, maintenance, and employee training. However, these cost drivers can be kept in check withproper preparation and astute planning.

Open source Big Data projects have thriving community forums where members constantly test the source code and update it for any bug fixes as soon as they emerge. Moreover, almost all the issues regarding the software would have already been discussed in such community forums with appropriate solutions for mitigating any risks involved. This gives enterprises the confidence to adopt an open source software rather than spend millions on a commercial solution. Community forums have indeed been a major factor behind the growth of many Big Data analytics platforms including Hadoop, Spark and Storm.

For Big Data analytics, open source is indeed the future. International Data Corporation (IDC) in 2011 published a report highlighting the growth of digital data. According to the report, by 2020 the current 40 trillion gigabyte digital universe will be 50 times larger than it was in 2010. Considering their robust scalability feature, handling such enormous chunks of data may not be an issue for open source frameworks.

Furthermore, open source software is a great advocate of the remarkable technological movement currently happening over the internet– to be part of a community and share knowledge or expertise. By being part of open source frameworks in analytics or other technologies, enterprises are collectively participating in the development of a system that will in future benefit more organizations in realizing their objectives; and that’s what communities ultimately stand for!