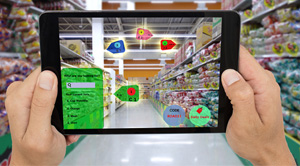 Of all the participants in the survey, 92 percent planned to implement their tasks in the third quarter of the year, wherein almost 90 percent looked forward to witnessing hike in revenues within the same quarter of implementation while 80 percent foresee increased revenue from mobile sites as well as apps in the same quarter. It is undeniable that as the growth projectile moves forward, the retailers change their plans when concerning investment in the best artificial intelligence technology. Through this year, product recommendation has seen many retailers using their artificial intelligence to.

Chatbots have taken a place in the center of retail AI functionalities. While a small percentage of users already use AI for chatbot, one fourth has planned to implement the same in the next one year. Mobile software company, Helpshift, set the example in recent months by using artificial intelligence in retail space. Recently, the customer support platform provider announced the launch of Helpshift Web Chat where AI is used to provide customer service through chat-based media on websites and mobile sites. Many retailers have shown the willingness to use chatbots and customers are ready to embrace the same as well, although the first gen chatbots are going to be fairly filled with limitations.

Noble.AI: Creating Scalable AI Technologies for the World of Science and R&D

Opinosis Analytics: Getting the Most Out of AI

Black Cape: Building the Next Generation of Dual Use Technology

Vic.ai: Harness the Power of Autonomous Accounting and Financial Insight

Talisai: Improving the ROI of AI and Advanced Analytics

Data360 and NeuroSigma Establish a Strategic Partnership for Digital...

The Necessity of Digital Twin Technology in 2023

Jetfile Technologies Collaborates with Input 1 to Provide Users with...