The Evolution of In-memory Data Cache 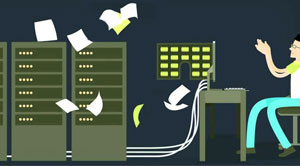 Following the technological evolution path, memory cache storage techniques also developed from simple cache memory to complex data grids. While the first distributed caches appeared in the late 1990s the data grids—a set of services facilitating individuals or groups of users with the ability to access, modify and transfer large amounts of geographically distributed data that emerged around 2003-2005. The memory data cache technologies are enjoying a significant boost in the recent years owing to an explosive growth in the in-memory computing. The general price reduction for DRAM as well as flash storage systems fueled the growth of in-memory data cache developments.

Amid the big data boom, the in-memory database market will also enjoy a significant improvement in its annual growth rate (CAGR)–leaping from $2.21 billion in 2013 to $13.23 billion in 2018 predicts Markets and Markets, a global research firm.

An in-memory data grid is a key-value in-memory store that can enable caching data in-memory within distributed clusters. The system was built and designed to linearly scale hundreds of nodes with strong semantics. These design constrains offer data locality as well as routing of similar data for reduced data noise redundancy.

The modern data cache systems are designed with sophisticated techniques offering lightning fast performance. In the history of computing, "make it faster" has always been the best virtue everyone has been pursuing. As the capacity of main memory incremented, it was necessary for platforms actively using main memory as a storage area to improve the cache efficiency. The In-memory databases are designed with inherent capabilities for scaling thousands of servers with a sophisticated architecture.

While in server farms, development of scalable and fast applications requires ultra fast memory for the changing landscape and need of handling increased workloads. The modern in-memory data grid (IMDG) is designed with a distributed software architecture that enables storing data in the storage device across a cluster of servers. The solution thus offers a fast, scalable, highly-available, and uniformly accessible data storage layer for use by business logic within distributed applications while allowing caching data from database servers and other sources.

Some of the leading providers like Oracle and Hazlecast help leading organizations worldwide to manage their data with parallel execution and in-memory storage for breakthrough application speed and scale.

The In-memory data grids offer numerous benefits for the modern computing that require ultrafast data storage and retrieval. The evolution from the simple cache memory to sophisticated In-memory data grids has tremendously increased the speed and efficiency of these systems. Take a look at some of the most important benefits that these devices offer for the latest computing and server solutions.

In-memory data grids are highly scalable systems. As scalability and low latency are balanced, scalability keeps the system latency low when the work load increases. Such collaboration offers quick result under all circumstances. Some of the sophisticated data grid architectures offer multi-core and data-parallel computing strategies for increased and efficient scalability by adding servers. This technique also automatically balances the in-memory data loads across storages for maximizing efficiency and throughput.

The ability to integrate live production systems or critical systems sets in-memory data grids apart from other methods. The evolving systems are capable to withstand huge workload at demanding environments. The latest in-memory architecture ensures that data is never lost and computations always complete even during a server failure.

As more data is being created and stored every day, storage technology will also face better evolution in the coming days, leading to the gradual improvements in in-memory cache as well.

Phantom AI Bags $22M in Series A Round of Funding