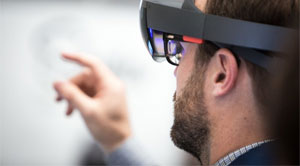 Not so long ago, the enterprise arena was introduced to two innovative ideas about wearable devices that had the potential to redefine the human-computer interaction domain—augmented reality (AR) and virtual reality (VR) technology. After decades of trails and advancements, enterprises today thrive to implement these technologies into their products and workflows as they enhance the user experience by blurring the lines between perception and reality. Over the years, AR and VR gears have spread like wildfire and are now cheaply available in the market.  Experts predict that AR and VR will become one of the leading industries worth nearly $160 billion by 2020.

The Real Impact on Global Enterprises

Soon after enterprises shifted from brick-and-mortar retail to e-commerce, the surge in the number of goods purchased online paved the way for virtual trail-rooms, where consumers could see the result of their purchases before placing the order. Collectively, AR and VR are also considered one of the best marketing tools as they create another dimension for the consumer and connect with them on a personal level. The gaming industry was next in line to implement the concept of AR and VR. The combined technology enabled users to interact in real time and play in an imaginary world where physical and virtual objects existed side by side. As such, the production of AR and VR equipment has evolved into a lucrative new line of business.

Many enterprises are now trying to implement VR in the human resource domain to give candidates a better understanding of the job roles. Other companies are utilizing VR gear for meetings and conferences so employees or stakeholders from all around the world can interact better. Experts predict that AR and VR would become indispensable to enterprises worldwide by 2025 as the benefits will be better interaction between users and lowered maintenance cost.