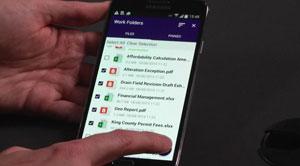 FREMONT, CA: Microsoft has recently released Work Folders to sync work files across devices and access them even during offline. For important official documents, providing access to employs personal computers and smartphones can be a bit of a security nightmare, Work Folders allows users to work with sensitive information that is stored on an organization's server. It extends support for windows, android and iOS operating system users.

Companies command control over corporate data by storing files on centrally managed file servers with user device policies such as encryption and lock-screen passwords. Work Folders can be deployed with existing systems of the company with Folder Redirection, Offline Files, and home folders. It stores user files in a folder on the server called sync share and also gives an option to the user to specify a folder that already contains critical data. The feature enables the users to adopt Work Folders without migrating their servers and data. The security feature includes at-rest encryption, meaning the files would not be usable without a passkey.

Prior to installation, Work Folders requires server certificate for each file server that will host Work Folders. These certificates should be from trusted certification authority. Furthermore, it requires publicly registered domain name with the ability to create additional public DNS records for the domain. Work Folder is available as free for downloading but since it's for organizational accounts, it requires a subscription fee.

Pype: The ‘Game Changers’ of the Construction Industry

Topcon Positioning Systems: At the Intersection of Field and Office

Identified Technologies: Know When Others Guess

Bricsys: A Step ahead in CAD Technology

SIS Software: Managing Every Aspect of a Project Lifecycle

Kespry: From Nothing to Answers

HomeSphere: A Powerful Digital Platform for the Residential Building Industry

Applied Software: How to Take Field Operations to the Cloud and Back

WorkflowMax: A Highly Intuitive Application for the Construction Industry

Requordit: A New Renaissance in the Construction Industry

Viewpoint: Defining the Future of Construction with Solid Project Solutions

Fieldwire: A Construction App Designed for the Field

Assai Management Consulting: Bridging the Gap between Strategy and Execution

Panzura: Enabling a Globally-Distributed Employees to Work Like They Were in the Same Room

e-Builder: Meeting the Needs of Builders through Construction Management Software

RedSky IT: Software To Avert The Tediousness In Construction Projects

Textura Corporation: Bringing Technology To One Of The Most Concrete Industries In The World-Cons