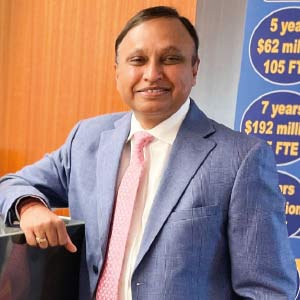 Anil Sharma, CEO, 22nd Century Technologies
Forward-thinking companies always anticipate the challenges ahead and lay the framework for overcoming them. Grounded in the future, they lead with purpose and inspire others to innovate and tackle the challenges head-on. Cast in the same mold is 22nd Century Technologies, an innovative IT service integrator, and workforce solution company. From staying at the forefront of the IT space in tackling the greatest IT threat of the late 90s—the Y2K scare—to maintaining a proactive stance in strengthening the mission-critical programs of our nation by collaborating with the federal, state, and local governments, its forward-thinking attitude is what truly defines 22nd Century Technologies’ strive in the IT arena. Its subsidiary GovTech Cloud further bolsters 22nd Century's growing technology capabilities and talent base, particularly its emphasis on building citizen-focused digital services with SaaS-based offerings.

Right now, in the wake of the COVID-19 crisis, the company is substantially aiding the government and private sector organizations in charting the course of their journeys toward cloud transformation. “Since last year, the cloud has swiftly transitioned from a ‘nice-to-have’ option to a ‘must-have.’ Our clients who didn’t want to consider the cloud earlier, especially our government sector clients, are now looking to speed up their cloud migration,” says Anil Sharma, CEO of 22nd Century Technologies. So, driven by the motive to turn the crisis into an opportunity for its clients, 22nd Century Technologies is seamlessly helping the public and private sector embrace cloud-native services and SaaS-based applications.

What truly steers GovTech Cloud ahead of the competition in the domain is the same trait as that of its parent company—offering solutions that best fit the client’s needs and not the other way around. “We assist our clients in comprehending what’s right for them instead of pushing for a particular cloud vendor,” asserts Ritesh Pahwa, the co-founder of GovTech Cloud. And although vendor-agnostic, GovTech Cloud inherits 22nd Century’s strong partnerships with all the leading cloud providers like Amazon Web Services (AWS), Microsoft Azure, Google Cloud Platform (GCP), Oracle, IBM, Salesforce, and ServiceNow.

This way, the company ensures that they are always at the top of its cloud game, which is beneficial to both them and their clients.

This client-centricity reflects in the company’s client onboarding process as well. The process usually starts with an assessment of the client’s ‘as-is’ situation on the cloud, followed by offering them an alternate ‘to-be’ scenario, “how it would look like when they move to the cloud,” notes Pahwa. Then, based on the analysis and the client’s budget, 22nd Century walks the client through its extensive cloud offerings and custom-makes them according to the precise business requirements.

Today, 22nd Century is indeed playing a tremendous role in helping the public and private sector integrate cloud services swiftly. To cite the advantage the company is bringing to its clients, Sharma notes, “A typical procurement to the delivery cycle of a cloud project usually takes around 6-12 months.We are able to get the services up and running in less than four weeks,” mentions Sharma.

22nd Century Technologies and its subsidiary GovTech Cloud is seamlessly helping the public sector by secure cloud offerings and SaaS based digital services for Connecting and Serving Citizens, Communities & Government

In one instance, the company built a remote infrastructure for the DoD in two weeks, which enabled tens of thousands of DoD employees to work remotely.

Similarly, 22nd Century has been working with different cloud vendors to migrate Air Force’s IT infrastructure and applications onto the cloud. Underlining 22nd Century’s efficacy in the cloud space, Sharma cites that they act as an intermediator between their DoD clients, like Air Force and Navy, and their IT needs. “Be it moving the applications to the cloud of their choice or migrating their mission-critical data, we cater to all their IT requirements,” remarks Sharma. Incredibly, while working with the Air Force, 22nd Century also built a center of excellence for their own company. “This center of excellence acts as a repository of best practices, research, support, and training concerning all things cloud, which can serve as a proof of concept for all our clients,” enthuses Sharma.

While driving such successes in the DoD space on the one hand, how 22nd Century aided the state of Minnesota in fighting COVID panic is also another good case in point to highlight the prowess of the company’s cloud offerings. GovTech Cloud developed an AWS-based helpdesk module for nurses in the state that enabled them to attend to the queries of the patient population via hundreds of hotline numbers. The nurses were able to share critical information with the patients, get real-time feedback regarding their health, and even triage them without worrying about getting exposed to the coronavirus. “Through this project, we took cloud to people’s homes during the pandemic,” remarks Sharma, proudly.

Consolidating Cybersecurity in the Cloud

22nd Century’s phenomenal feats in the cloud space can further be attributed to their downright expertise in cybersecurity. Banking on the support of over 800 cybersecurity professionals, the company presents a secure gateway for their clients to the cloud. By leveraging artificial intelligence (AI) and machine learning, 22nd Century offers a robust security layer that can mitigate even the advanced risks posed by today’s evolving cyber threat landscape. Meanwhile, their expansive collaborations in different areas, from federal and DoD to state and local agencies, also enable them to exchange extensive cybersecurity know-how from one sphere to the other.

Such extensive capabilities enable 22nd Century to manage the most mission-critical programs of the nation, like the FBI InfraGard program, which is running in AWS GovCloud. “To convince a client like FBI in migrating their applications to the cloud and provide them the requisite security is something that speaks for our potency,” states Sharma.

Riding on the coattails of these competencies, 22nd Century has carved a niche for itself in the domain as an ideal cloud service partner for the public and private sector alike. Moving forward, 22nd Century is looking to venture into new industries and verticals, with its subsidiary GovTech Cloud. “SaaS offerings are going to be pivotal for organizations across diverse sectors in the new normal,” indicates Sharma. “Our ability to provide best ROI-driven SaaS offerings, together with top-of-the-line cloud services and advanced cybersecurity, prepares us to become their go-to cloud partner for today and tomorrow,” he concludes. 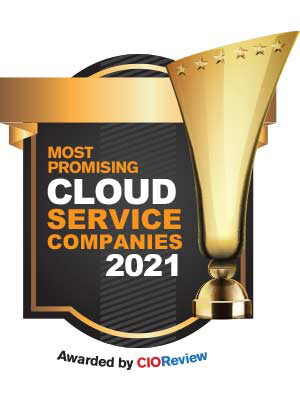 Description
22nd Century Technologies is seamlessly helping the public and private sector embrace cloud-native services and applications. And now via its subsidiary GovTech Cloud, it expands into SaaS based solutions. Leaning on the proficiency and strong foothold of 22nd Century Technologies in a diverse range of sectors (defense, civil, healthcare, and education), GovTech Cloud is leveraging 22nd Century’s position in the market today to provide cutting edge cloud 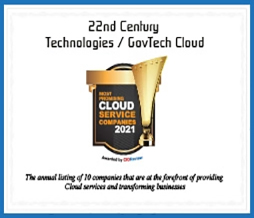 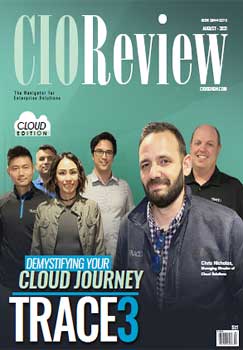