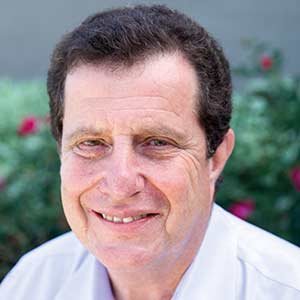 Richard Rabins, CEO
With the advent of mobile devices, traditional field workers, essential any worker who doesn’t reside at a desk, now have an opportunity to work digitally and move away from traditional methods of conducting business, such as paper forms. Leading mobile app development company, Alpha Software, has focused on the challenge of providing outstanding digital experiences to these mobile workers. The company has focused on solving challenges delivering business applications and functionality to small mobile screens, working with different smartphone platforms and enabling work with or without a WIFI or cell signal.

Even in today’s seemingly fully-connected world, there are numerous internet dead zones such as hospitals and warehouses where mobile workers often face spotty cell or WIFI signals. To ensure workers are always productive, mobile apps must factor in the unavailability of the signal and provide features and functions to do work even if the mobile workers lose signal.

“Through its development of robust, offline-capable mobile apps, Alpha Software delivers mobility for workers – even when there is no signal,” says Richard Rabins, CEO of Alpha Software.

Alpha Software offers a foundational technology called Alpha Anyhwere. The software is a complete front- and back-end, low-code app development platform for rapid development, distribution, and deployment of enterprise-grade web and mobile applications. Compared to traditional coding, Alpha Anywhere cuts the development time to 4 to 6 weeks for any complex apps. With built-in robust offline capability, Alpha Anywhere persists data to local storage and restores the data when the app is reconnected, enabling any changes made by the user to be synchronized when the connection is restored. When offline sync occurs, there is a possibility of a conflict occurring (when a system of record worker and a fieldworker may have edited the same record, resulting in two versions of data). In such cases, the user is notified through color-coded markers, and can decide how to handle the conflict and synchronize the edits to the server.

Alpha Anywhere applications can integrate with any existing system of record, API, and workflow, including SAP and Oracle. The software produces cross-platform mobile apps that resize for different shape screens and work on any mobile device, regardless of the operating system. Alpha Anywhere apps can include maps, charts, and gauges along with ink controls for digital signatures, image annotation, and audio/video capture. Apart from these capabilities, the platform creates sophisticated reports from data sources and generates them in required formats, such as PDF.

The typical use case for the software involves dispatching work from company headquarters to the field worker. For instance, in healthcare, if a visiting nurse needs to visit patients at home, the mobile app serving that nurse should include secure patient history, instruction manuals for equipment being used during the visit, a method of recording the patient’s health during the visit and the ability to schedule a future checkup. In remote locations, often WIFI or cell signals are weak or unavailable, and in those cases the assets should be available to the healthcare worker even if the app is offline. During the visit, the worker captures the patient’s vital signs and health data. Once the worker is back in an area with a strong signal, the data is synchronized, and reports or forms are generated based on pre-set requirements. If there is any work left behind, a workflow also can be initiated.

In its work with customers, Alpha Software noticed that most frequently, customers were using the software to product data collection apps. This led the company to build a new product named ‘Alpha TransForm’ that reduced the time required to produce data collection apps to hours versus weeks.

Through its development of robust, offline-capable mobile apps, Alpha Software delivers mobility for workers – even when there is no signal

Alpha TransForm builds mobile forms apps that have robust offline operations with embedded business logic. The product is uniquely able to offer the power and control of rich low-code platforms combined with the ease and speed of mobile forms software. The data can be captured and retrieved from the SQLite on-device database in applications. In addition, the built-in Alpha TransForm Programming Language (TPL) allows developers to build powerful client-side calculations, validations behaviors, and web service interfaces.

Illustrating the efficiency of Alpha’s ingenious platforms, Rabins highlights an instance where the company helped an insurance company improve productivity. The client operates about 400 body shops in the U.S. for accidents. The workflow is very complex. First, the worker has to go to the accident spot to evaluate the damage and submit forms to the insurance company. Subsequently, the vehicle is brought to the repair center, and data is captured through forms to track the work being done, which is sent to the insurance company, and funds are released. When Alpha Software stepped in, this complex workflow was performed entirely with paper. The company combined Alpha Anywhere for workflow requirements and Alpha TransForm for data capture to solve the problem. By taking the process mobile, Alpha was able to significantly improve worker productivity to such an extent that the client now processes 20 percent more work without increasing any headcount. The improvements are now resulting in improved financial performance for the organization, as well.

The power and efficiency of Alpha Software’s rapid mobile app development platform is also helping to fight the global pandemic. The company collaborated with doctors on the front lines of the COVID-19 response in New York City to develop a data collection app named the ‘Alpha COVID-19 Risk Assessment App’. Built in a few days, the app helps users to assess their risk for having or developing COVID-19 using up-to-date CDC guidelines. The company also updated the app shortly after its initial release to include more than 5 languages, and it’s now in use around the world.

Numerous such success stories up its sleeves, Alpha Software is forging ahead with a mission of continued innovation in mobility. “The current crisis will make permanent changes in the way people work, and people need systems to support them in the future, regardless of where or how they work. Alpha Software is committed to innovating the power curve, feature sets, and speed and ease of building powerful business apps,” concludes Rabins. 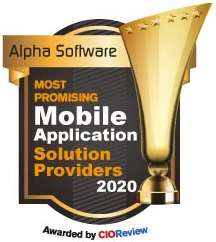 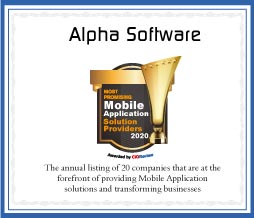 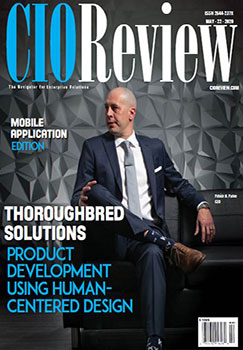