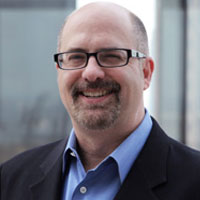 Patrick Kerpan, CEO & Co-founder
“There is a longstanding belief that ownership of an infrastructure would ensure security. However IT organizations today face a cognitive dissonance provoked by the growing realization that data centers are not necessarily secure,” says Patrick Kerpan, CEO and Co-founder, Cohesive Networks. Within a data center, all data is moved in plain text around inside network and encryption is done only for special circumstances. Addressing this plight with an application centric approach to security is Cohesive Networks—a cloud-native security and network company whose product moves well into the DevOps movement.

"We are a value added complement - a new part of the defense in depth strategy for securing cloud and data center infrastructure. Our product, VNS3, is a software-only network security appliance that creates a security perimeter around individual application deployments," says Kerpan. The foundation to Cohesive's security approach is 'all encryption.' "Our specialty is - encryption in and around clouds - a model we first introduced to our public cloud customers that we are now bringing down to the data center. As cyberattacks become more professional, no server, whether in the cloud or data center can interact with another unencrypted," affirms Kerpan. Cohesive Networks address security challenges at the application level using the VNS3 product family, what they call an Application Security Controller for complete network security and monitoring.

"The increasing complexity of IT systems increases the potential vectors for attack. Apart from standard security protocols, there is a contrasting difference between people with an application-centric vs. network-centric view of IT security," says Kerpan. Though security and networking companies talk about application-centric capabilities, in many cases the solutions focus on the data center edge. This can create a user experience where operations staff cannot understand the totality of the applications deployed and security controls in force.
Cohesive Networks bridges the gap between network-centric and application-centric views with VNS3 - an application security controller. Using VNS3, clients build a secure perimeter around each application deployment, similar to the data center perimeter created by their network and security hardware already in place. The same controls enabled on the edge are reinforced by the VNS3 micro-perimeter running at the application edge. “We don’t have any hardware. VNS3 is available as a virtual machine that can integrate to the underlying virtualized data center or cloud infrastructure,” asserts Kerpan. “What’s different about us is that we focus on user experience,” he adds. One of the best things about virtual networking, Kerpan says is that one can deploy VNS3 against in-place infrastructure or hybrid mode while securing only a sub set of the application, data base traffic or application server. “One can start by looking at a single application; grow the security footprint through time focusing on the use-cases that are the most critical,” he narrates.

Cohesive Networks has helped clients in public cloud and private data center secure applications, migrate entire data centers and connect and secure hybrid deployments. For instance, a large financial institution that was ‘cloud bursting’ experienced problems associated with some of the data being transferred in plain text to and within the public cloud environment. In addition to the end-to-end encryption problems, the client also faced a challenging task of deploying similar capabilities into their private data center—the hybrid cloud issue. Cohesive Network helped the client with their security and performance with a simplified hybrid solution.

Going forward, Cohesive Networks is focused on the simplification of cloud and data center networking by making things like network failover, dynamic routing, and management easier. In terms of new technology, the company will be looking towards providing IPV4 to IPV6 migrations using their virtual networking product and expertise. Future go-to-market plans look to expand reach into SA and APAC geographies.