Dr. h.c. Svante Littmarck, CEO
“Simulation is the key to make virtual product development a reality. So it's no wonder that simulation software is growing rapidly in terms of software spending and usage in product development processes,” begins Svante Littmarck, President and CEO, COMSOL. However, when it comes to designing software to simulate physics-based systems there are numerous requirements and challenges. “Physics represents the complex world we live in. Making sure that the mathematical model—the laws of science—includes everything that is significant to the actual case, but not more than necessary, is difficult,” asserts Littmarck. To this need, COMSOL is devoted to foster creativity through an exciting, challenging atmosphere in which individuals excel and prosper. The firm develops easy-to-use software for modeling and simulation of real world multiphysics systems to make technology the primary tool for engineers, researchers, and lecturers in the education and hi-tech product design fields.

Based on their deep passion for empowering users with more elegant decisions in solving tasks, the firm offers COMSOL Multiphysics—a general-purpose software platform, incorporated with advanced numerical methods, for modeling and simulating physics-based problems. With COMSOL Multiphysics, users can extend conventional models for one type of physics into multiphysics models that solve coupled physics phenomena—simultaneously. It has a large number of applications which can be used in the development of high technology products. According to Littmarck, “Such apps make analysis and simulation available to people outside the relatively small group of experts in numerical analysis and mathematical modeling. Engineers in product development and manufacturing, and even consumers, will benefit greatly from this.”

Additionally, the firm unveiled the version 4.0 of COMSOL Multiphysics to make the power of multiphysics simulation available to a wider audience of scientists and engineers. Adding further credence along with the release of version 4.0 is COMSOL’s series of new LiveLink options that tightly integrate COMSOL Multiphysics into the mainstream product design workflow.
“It feels great to make version 4.0 available,” comments Littmarck. “This release represents a bold step forward in usability that will increase productivity and problem solving capacity.”

It is believed that there is a spell-binding bond betwixting Isaac Newton and COMSOL's software. In 1670’s when Newton formulated the differential and integral calculus theorem, he gave humanity tools to mathematically describe mechanical movements. “Once the mathematical model is present we need to convert it to something that we can compute, to difference equations,” explains Littmarck. Around these partial differential equations, COMSOL built their multi-physical solution. “COMSOL recognizes that its software will be used by the world’s most advanced organizations and individuals to produce advanced devices and processes, which poses another challenge for the company— simulation,” adds Littmarck.

To help extend simulation capabilities to a wider audience, the firm redefines the engineering simulation market with COMSOL Multiphysics software version 5.0, featuring extensive product updates, three new add-on products, and the new and revolutionary Application Builder. To reach a broader market, Littmarck says that the Application Builder and COMSOL Server initiatives will revolutionize the multiphysics business. With the Application Builder, the power and accuracy of COMSOL Multiphysics can be accessible to everyone through the use of applications. “By providing our customers with the flexibility to customize the visual appearance and style of the company’s COMSOL Server installation, they will be able to provide a cohesive brand experience which would in turn help the clients colleagues and customers to easily recognize and adopt into their existing processes,” says Littmarck.

Moving forward, “COMSOL is committed to provide reliable and intuitive simulation tools that support creativity and save precious development time,” concludes Littmarck on a progressive note. Setting an absolute revolutionary trend in the simulation industry through their visual software, COMSOL will be the leading organization of the future. 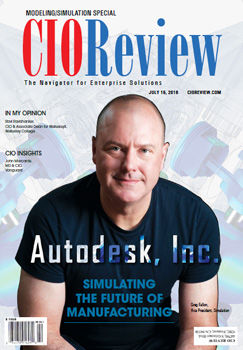