When it comes to a server virtualization investment, it would be counter-intuitive to perform such an upgrade only to end up with slower application performance than before. Since virtualization introduces complexity to the data path, system performance is dampened. Moreover, these issues are further exacerbated by Windows which doesn’t play well in a virtual environment, resulting in a surplus of excessively small writes and reads that chew up performance. There is a company that alleviates these performance pain points and helps organizations improve performance without the need for expensive server and storage upgrades. That firm is Condusiv Technologies Corporation. Brian Morin, Condusiv’s SVP of Sales & Marketing has a simple perspective to this conundrum: “When virtualized organizations run into performance issues, we save customers millions of dollars in hardware CapEx purchases by solving those performance challenges with our 100 percent software approach.”

Morin says that oftentimes, businesses are unaware of the I/O degradation that occurs in a virtual environment nor of the significant I/O taxes that steal performance. Condusiv’s V-locity® I/O reduction software provides virtualized servers with two core patented technologies that offload I/O from underlying storage and streamlines whatever I/O traffic remains. The first engine is a write optimization engine that displaces excessively small, fractured writes and reads with nice, large clean contiguous writes and reads so more payload is carried with each I/O operation.

The second engine is a read optimization engine that utilizes idle, available DRAM on the server as cache to serve hot reads. As Morin puts it, “The real genius in this engine is that nothing has to be carved out and allocated for cache— the software is aware, in real-time of the amount of memory unused and uses only that portion to serve hot reads, so there is never memory contention.” Perhaps, the most illuminating feature of this technology is that, as little as 2-4GB of available memory will end up caching 50 percent or more read traffic on that system. That boosts application performance significantly since DRAM is 15X faster than SSD and further offloads a significant amount of I/O from storage that it can now use for other things.

When virtualized organizations run into performance issues, we save customers millions of dollars in hardware CapEx purchases by solving those performance challenges with our 100 percent software approach

When Christus Health, one of the top healthcare providers in the nation virtualized its entire Windows server infrastructure, application performance came to a crawl, and the respective EHR applications that all the doctors and nurses relied on became slow. The client was unaware of the performance side-effects of virtualizing Windows servers wherein I/O characteristics become significantly smaller, more fractured, and more random than it should be. Christus Health was about to pull the trigger on a multi-million dollar storage purchase to fix the performance problem before Condusiv was called in for a consult. After they installed V-locity I/O reduction software, performance doubled and the storage purchase was no longer necessary.

In a similar vein, Condusiv has been helping thousands of businesses grow by optimizing their hardware performance and eliminating unwanted expenditures. They have a solid “Fortune 500” footprint across the globe in NA, EMEA, APAC, and LATAM. Condusiv functions horizontally, as their software is used in nearly every vertical market. The yearning for advancement and a keen eye to spot those ideas which put ingenuity alongside necessity are the driving forces behind Condusiv’s credo and methodology. 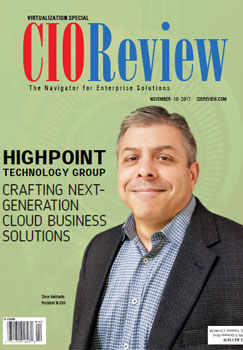