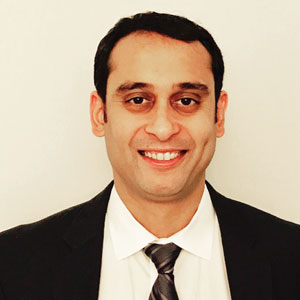 Government services are in the market for a new vision that offers a slightly different world to the one we operate in now. A world defined by high levels of citizen trust in their government. One where sensitive citizen data sets are never compromised. A reality where the public sector demonstrates high levels of operational efficiency in delivering various citizen services effectively. A world where taxpayer money is optimally utilized with minimal fraud, waste and abuse – allowing for the appropriate benefits to reach the right people at the right time. This is the vision for what’s possible when we capitalize on new opportunities powered by emerging technologies such as Blockchain that can be applied to making government more efficient, effective, and transparent.

According to the Pew Research center, less than 20% of Americans say they can trust the government to do what is right most of the time. That figure is similar, if not lower, in most parts of the world. Sensitive personal data breaches are happening too often – e.g. the 2017 Equifax database breach and 2015 Office of Personnel Management (OPM) database breach. In both cases, data on millions of Americans were exposed, then outright stolen. Government officials are required to meet mission objectives with limited resources and budget deficits. And taxpayer money is squandered due to inefficient operations and bad actors trying to exploit the system. The U.S. Medicare (government provided health insurance) program alone sees annual fraud estimates range from $20 billion to $70 billion.

While the potential for massive tech-driven change exists, the current reality is quite different. Risks to data security and citizen welfare provide opportunities to leverage disruptive technologies like Blockchain. In practice, Blockchain provides several benefits to government:

• It protects critical data through robust cryptography. For example, following a number of cyber-attacks from Russia, the country of Estonia has leveraged Blockchain for securely storing citizen electronic health records – effectively protecting them from external breaches.

• Blockchain provides a high degree of transparency through fundamental decentralization, which allows participants to see and verify data in real-time. A Blockchain solution for certain citizen services could allow for independent verification of governmental claims. For example, the respective governments of Sweden, Estonia, and Georgia are experimenting with Blockchain-based land registries, enabling multiple parties to er hold copies of each registry securely. If other nations join them in adopting this model, it could help to resolve property disputes quickly – or prevent them altogether.

• Blockchain can streamline intra-governmental operations. For example, consider the U.S. federal government’s ongoing challenge with reconciling intragovernmental transfers. At any given time, there are trillions of dollars in unreconciled funds lurking in the federal budget. The process of reconciling these funds is time-consuming, expensive, and creates budget uncertainty. A Blockchain-based accounting system could provide a permanent audit trail and facilitate faster reconciliation.

Despite all the inherent benefits provided by Blockchain, it’s imperative for public sector leaders to understand the main risks and challenges of adopting Blockchain for the government. First, there are no widely accepted standards for Blockchain technologies or the networks that operate them. As a result, government IT organizations may have a hard time assessing the quality of available Blockchain solutions and determining how best to integrate them within their existing IT infrastructures.

Second, since many Blockchain providers are small startups, it may be difficult for IT procurement departments to identify stable enough partners who can see through the project implementation.

Third, leaders in government agencies will need to understand the legal and regulatory implications of Blockchain. Specifically, they’ll need to answer the following questions: To what degree will smart contracts be binding? Can Blockchain audit trails be used as evidence in court?

Lastly, the government operates in a centralized manner whereas Blockchain is fully decentralized with no single ownership, rendering them fundamentally different modes of operation. To overcome these challenges, governments should consider following this five-step strategic approach for effective adoption and implementation of Blockchain:

1. Establish an overarching vision and connect with organization priorities: It’s critical to have this initiative be an integral part of an agency’s strategic planning process to ensure it gets the right attention and resources. Executive support and buy-in at the highest levels of the organization are important. Government organizations need to find a champion, ideally a technical or, at least, a tech-savvy executive who can shepherd the adoption and implementation of Blockchain. The champion can be supplemented by a small, highly efficient team looking for viable use cases where Blockchain can make a significant impact. This team should understand the agency’s mission and the new technology to identify the right use cases. These use cases should be prioritized based on quantifiable return on investment (ROI) and measurable outcomes such as a reduction in cost or processing time, increase in citizen experience, etc.

2. Integrate with existing enterprise architecture: Blockchain should be integrated with an organization’s legacy systems and support the overall IT infrastructure. This is critical to avoid creating siloed systems that operate in a vacuum and lead to disconnected operations. Blockchain’s capabilities can be augmented by implementing additional emerging technologies such as Robotic Process Automation (RPA) and Artificial Intelligence (AI). Exhibit 1 provides a sample reference architecture depicting Blockchain integration with legacy systems along with RPA and AI. 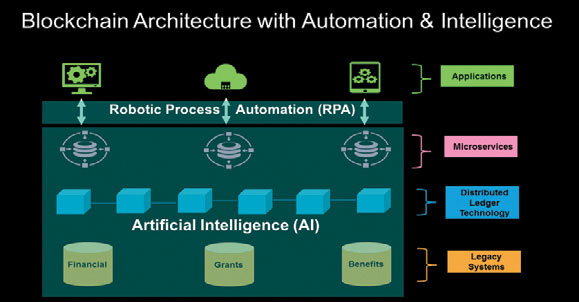 4. Prototype technologies and partner with providers: Work with technical staff to build rapid prototypes based on researched viable use cases with the highest impact and scalability. Seek feedback from end users during pilot programs to measure factors like user experience that are key for new technology adoption. Government organizations can explore partnerships with Blockchain providers that allow for joint opportunities to showcase and road-test products. Collaboration and partnerships also enable public agencies to accelerate their learning about Blockchain without having to add internal resources significantly.