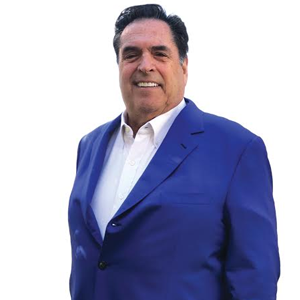 Jay Nussbaum, Chairman & CEO Drone Aviation's saga began in 2014, through the acquisition of Lighter Than Air Systems which used the crossover appeal of drone technology to break into military and civilian markets just years earlier. They brought in Jay Nussbaum, an esteemed 40-year veteran executive of government and commercial information technology sales and management, to expand their management team, lead strategic investments and advance their business development activities. Together, they inherited the loyalty and pain points of two booming markets that had an increased demand for more effective drone technology. With potential success just over the horizon, Drone Aviation looked 165 years into the past to pave a path into the future.

During the Civil War, small tethered, gas-filled balloons were used as manned observation posts above the battlefield. The tether allowed the observer, alongside a telegraph operator, to be raised in the air where they would relay information to commanders on the ground. Drone Aviation took this principle and combined it with modern technology to create a new breed of craft that could address the challenges of both civilian and military markets with creative solutions. With this innovation, the company geared up to take their next big strategic step, relying on tantalizing offers of efficiency, customizability and fair prices to push their business forward.

With their new take on tethered drone technology, Drone Aviation ventured into their old markets with new answers. Since 2009, the military has used the company’s drones for Intelligence, Surveillance and Reconnaissance (ISR), as well as video monitoring and communications. Today, the military determines their investments by a SWaP-C model, which factors in size, weight, power and cost. While manned aircraft and existing drones bolster high upfront and operational costs, these new drones offers an easy way out. Power, command, control and data could be more securely relayed via the tether, and these drones could be more quickly and economically deployed.

But that’s not all. Tethered drones, unlike traditional free-flying drones, are incapable of being jammed and capable of carrying larger payloads, flying for hours and securely collecting and distributing information without being susceptible to hacking. They require minimal training or advanced know-how to operate and are easily transportable, making Drone’s platforms a tremendous asset to the military market. The hobbycraft drones offered by the competition, on the other hand, have to carry their own power supplies, and lack the proper power to make use of high-end payloads like stabilized zoom day/ night camera systems or communications hardware. They also carry a dangerous susceptibility to radio interference.

“We see the drone as a critical extension of the network where its sensors are capable of capturing and relaying critical data and information to its users in real time. This makes the drone one of many input sources of big data for enterprises, civilian agencies such as law enforcement, or the military,” explains Jay Nussbaum, Chairman & CEO, Drone Aviation. The usefulness of these drones even extends into the commercial sector, which can use them to safely inspect buildings, oil rigs, power stations, railways and other linear and non-linear assets. For reasons that will be discussed later in this story, this is owed to Drone Aviation’s patented tethering system.

Inside the State of the Art Drones

Drone Aviation’s product portfolio spans a multitude of tethered products, which range from Electric Tethered Aerial Platforms (ETAPs) to the Winch Aerostat Small Platform (WASP). Each of them are designed for various purpose in the military, government and commercial sectors. At the heart of these technologies are the Tether and Tension Control Winch System, which grant the user a distinct set of advantages with each drone. The tether, which we’ve already discussed, is an armored smart leash that provides uninterruptible power and unhackable communications to the drones.

The Tension Control Winch System (TCWS) on the other hand serves a different purpose. It maintains consistent tether alignment to the drone, allowing it to ascend and descend, and maintain its loiter and mobility modes. The tension control monitoring and adjustment system measures the tether line hundreds of times per second, which allows users to maintain full control over the drone and switch altitudes if necessary depending on their requirements. Through these and other technologies, Drone Aviation’s products are also capable of supporting various payloads, which include the earlier mentioned camera systems and communications hardware. WASP’s small size and self-contained helium supply guarantees lower costs, easier transportation and the conveniences that come with tether usage. The company’s ETAPs, called the WATT and BOLT, don’t need to carry a battery, which means that these drones can carry heavier, more advanced cameras and be loaded with more sensors. Since the power and command and control comes from the ground, they don’t need to support wireless control systems, which reduces design complexity and costs while enabling greater capabilities.

Taking Drones Above and Beyond

Drone Aviation's compelling show of progress can be credited to the successful partnerships that they maintain with key players in the space.
Take their collaboration with Georgia Tech Research Corporation, for example. By partnering with their engineering team, Drone Aviation has managed to develop exclusively licensed technology that includes artificial intelligence and vision-based navigation systems. This gives the drone autonomous flight management software and an autopilot system, which has been coined GUST, the Georgia Tech UAV Simulation Tool.

The company has even partnered with an enterprise software development company to help optimize their drones for the commercial sector. With Infor, Drone Aviation has developed the Drone Enterprise Asset Management Solution (DEAMS), a combination of their drones and Infor’s enterprise asset management projects. With a drone’s ability to perform functions like perch-and-stare, video capture and laser scanning, it can effectively replace the functions of inspection and compliance. This, again, is how drones are able to safely inspect buildings, oil rigs, power stations, rail ways and other linear and non-linear assets.

“We view the partnership with Infor as the first wave of new drone applications that can provide CIOs of large enterprises with entirely new levels of real-time, actionable data from across their businesses,” says Nussbaum.

Soaring Above the Competition

For an example of just how effective these drones can be, all you have to do is look at the conventional platforms that the military looks at to effectively lift their payloads into the air. The price of helicopters ranges from $1,800 - $3,500 per flight hour. In addition to that, portable antenna mast systems don’t exceed 100 feet, and fixed-wing aircraft can’t loiter over an area, especially densely populated urban areas, and can cost anywhere from $500 to $35,000 per flight hour. With the WASP, clients get a compact, mobile, multi-day duration aerial platform that can be operated by 1-3 people. It can function at or below 1,500 feet without heavy maintenance, fuel, highly trained crews, extensive support, larger launch areas, higher operating costs and an overall larger logistical footprint.

So after having developed a product that’s served customers as reputable as the Department of Defense, what’s next for Drone Aviation? The company has turned its attention to create solutions that are compliant with the new FAA rules. They hope that, in the future, more customers will use their product for everything from news gathering, first responder/disaster response, infrastructure and large facility monitoring, and security. The company continues to rely on their strategic partnerships to integrate and create larger, more capable innovations.

“Drone Aviation is moving beyond the hardware to working with partners such Infor and Adobe Systems to integrate our platforms into data-centric solutions that will allow customers to harness the data collected by the drone as part of their asset management and security systems via the cloud and enable on demand and real-time big data analytics. This represents a vast new opportunity for a company like Drone Aviation,” concludes Nussbaum. 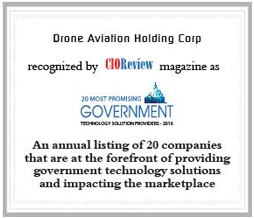 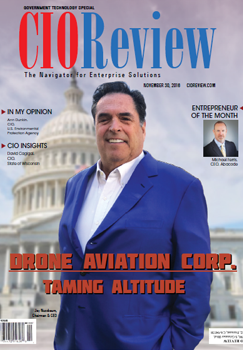