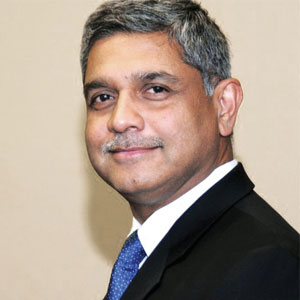 Ramesh Warrier, Managing Director
Ever since IT organizations—both large and small— started injecting ‘agility’ into their already complex technology-driven environment, business risks began to rise gradually. While IT disasters were not uncommon, some were so severe that it crippled an organization’s entire workflow. Meanwhile, emerging as a ray of hope amid these circumstances, eBRP Solutions identified that although there were numerous Business Continuity Management (BCM) solutions available in the market, they failed to meet an organization’s needs in a comprehensive manner. In a bid to fill this void, eBRP developed a new range of tools that eventually evolved into the eBRP Suite. “While developing the eBRP Suite, we took a different approach and reverse-engineered the processes and components, rather than starting with gathering data and formulating plans. This created a software environment in which the ultimate goal is Incident Management,” explains Ramesh Warrier, Managing Director, eBRP.

According to Warrier, the eBRP Suite has always focused on assets—facilities, technology, people, processes, and vendors as the fundamental organizational structures on which day-to-day operations depend. “Consequently, a single disruption would lead toward the non-functionality of at least one of these assets,” states Warrier. The eBRP Suite enables organizations to ‘model’ the inter-relationships among assets. While evaluating risks, it is the dependencies among the assets that determine the overall impact of threats to organizations. Eventually, these dependencies help eBRP Suite understand where the biggest risks lie and the steps needed to mitigate those risks.

“eBRP has its own definition of resiliency: the ability to respond effectively to any disruption and return to production with a timeframe acceptable to business stakeholders,” remarks Warrier. It is this ability that has paved a productive path for a number of customers. For instance, eBRP helped a client migrate from an unsustainable BCM platform. Warrier’s team didn’t just transfer the customer’s data, but also helped them redefine their future objectives.

We don’t slavishly follow methodologies; we focus on the root need for BCM which some prospects and industry pundits find difficult to understand

Further, they conducted thorough disaster recovery tests on the customer’s system using the eBRP Suite. “Our Suite automated the client’s updating and approval processes and streamlined the workflow—facilitating seamless maintenance processes.” Warrier notes that, one among eBRP’s many key differentiating factors is its flexibility to assist even the largest global organizations without the loss of integrity or manageability.

Ever since its genesis in 2002, eBRP has been monitoring the emerging trends and practices that are bound to make an impact on the disaster recovery landscape. Highlighting eBRP’s unique approach, Warrier says, “We don’t slavishly follow methodologies; we focus on the root need for BCM which some prospects and industry pundits find difficult to understand.”

Apart from being a software company, eBRP is also a services provider with 15 years of experience in the disaster recovery domain. The company understands that missed expectations do exist. “We don’t just sell software; we work closely with customers to help them get the most out of eBRP’s products,” explains Warrier.

In the days to come, eBRP plans to leverage machine learning and cognitive sciences focused on distilling massive volumes of data—to support decision-making and incident response. The company’s ultimate goal is to reduce organizational vulnerability and the impact of disruptions, while empowering organizations to be more resilient. 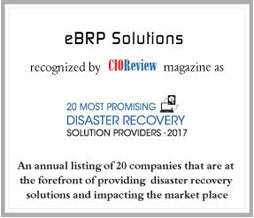 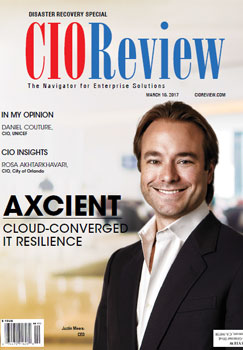