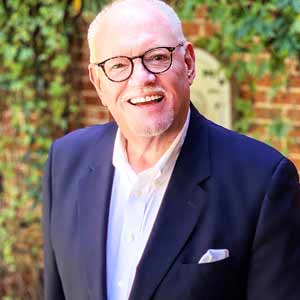 Phil Burks, Founder
During an emergency, a few minutes can mean the difference between life and death. A recent study by the Federal Communications Commission (FCC) revealed that more than 10,000 lives could be saved each year if emergency services can shave one minute off of every 911 call and quickly locate and respond to a situation. To that end, over the past decade, computer-aided dispatch systems (CAD) have helped 911 dispatchers accelerate the process of handling calls from landlines and smartphones, as well as text messages by quickly routing emergency calls to the nearest fire department, hospital, or police precinct while providing key details about a caller’s situation.

However, these systems fall short when all of the information about a call for service cannot be entered into CAD or conveyed by the dispatcher because there is a myriad of information flowing in a short period of time. Alongside, challenges also arise when emergency response teams are needed outside the 911 district where a call originated—a common occurrence in rural areas or big jurisdictions. But, what if there was an alternative way for first responders to see and analyze an emergency situation before they could get there? 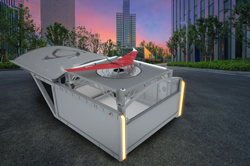 Phil Burks, the CEO of The Genesis Group, a global software solution provider, is turning this idea into a reality with his new venture, FIRST iZ®. The firm is leveraging drone technology to enhance the ability of emergency response teams to de-escalate and resolve issues in the safest and most effective manner. “Our new patent-pending drone system enables first responders to inspect an incident before they get there and be prepared to handle the situation seamlessly,” says Phil Burks, founder, FIRST iZ. Pronounced as ‘first eyes,’ the namesake UAV system is programmed to autonomously fly to the location of the incident at over 60 mph, send live video while in transit, sniff for hazardous gases, hover while still sending live video, and allow first responders to ‘know’ what they are facing before they dispatch vehicles and people. Burks believes FIRST iZ will revolutionize how first responders are briefed and equipped to respond to incidents.

FIRST iZ is powered by a novel navigation software package Genesis PULSE—an emergency software solution owned by The Genesis Group—for autonomous drone operation and UAVs designed for optimum flight times to arrive first on a scene. Often, a 911 caller may not be able to accurately describe the severity of a situation, which prevents dispatchers from understanding the kind of personnel and assets required at the spot. This is where FIRST iZ makes the difference. When a 911 call is received, information is entered into the CAD system, and once the GPS coordinates of the incident are calculated, the Genesis PULSE software locates the nearest FIRST iZ drone—at a city-or county-owned facility such as a fire station or police substation. With just the click of a button, the drone can be autonomously dispatched to the site of the desired location.

What makes FIRST iZ unique is that the high-speed drone is remotely programmable for a fully autonomous mission— including a primary flight path, target location, tasks at the location, and close-out instructions.

Furthermore, the FIRST iZ ecosystem comes with FIRST Port, a smart, weather-protected, temperature-controlled drone port that houses the drone between flights and also serves as a ‘smart’ charging dock. FIRST Port has the ability to wirelessly assess the health of the drone and alert the Genesis PULSE software if there are issues that need to be addressed. What’s more? The port has landing aids built into it to help the drone align itself for a proper landing. The port also includes an alarm system, which sends immediate notifications when potential operational issues arise. “The UAVs fly on missions, come back, land on their own, and then they go back into the port and wait for the next mission,” asserts Burks. 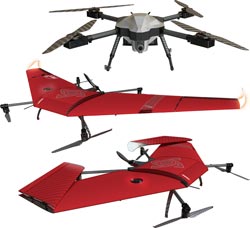 Besides, the FIRST iZ system also comprises an emergency response and notification system that includes software and hardware for assessing and coordinating the dispatch and notifying third parties. The system provides information to emergency responders through a communications and data network allowing communication between drones and first responders to assist in rapid decision-making and situational awareness. “More recently, we integrated the crowd-sourced navigation application, WAZE, with the Genesis PULSE, and now, FIRST iZ has knowledge of incidents before an emergency call is placed,” adds Burks.

R&D is at the heart of everything FIRST iZ does. The firm has created several drones that can be launched autonomously in less than two minutes. Equipped with cameras that can transmit daytime and thermal video in real time, sensors that detect dangerous emissions and transfer that data back to decision-makers, and a parachute for safety, the drones are not only designed for industry demands but also comply with regulatory requirements. “FIRST iZ is currently in its beta testing stage. We are keen to get our Series A raise done in the next few months,” concludes Burks. 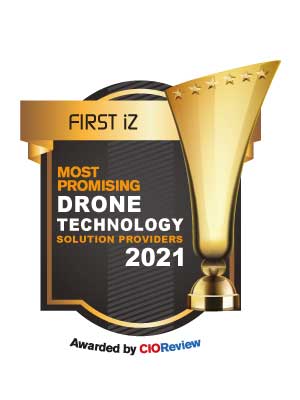 Description
FIRST iZ is a venture by Phil Burks that leverages drone technology to enhance emergency response teams’ abilities to de-escalate and handle problems safely and efficiently. The UAV system is programmed to fly autonomously to the incident location, provide live videos while in transit, sniff for hazardous gases, hover while still delivering live video and provide first responders the opportunity to ‘know’ what they will encounter before dispatching vehicles and personnel. With just the click of a button, the drone can be autonomously dispatched to the site of the desired location 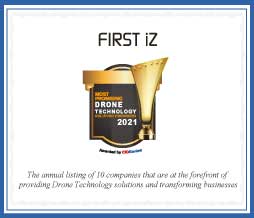 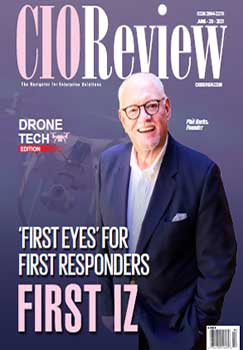