Paul Sun, CEO
The rapid pace of development in video surveillance technology has led to a linear increase in the development of Video Management Systems (VMS). With the technological evolution, there is a growing need to transition from traditional, legacy PC and client-server based VMS to the cloud. “The benefits of cloud computing translates to lowered costs for secured video infrastructure deployment,” says Paul Sun, CEO, IronYun. “With our Video Surveillance as a Service (VSaaS) products and solutions, we seamlessly integrate with an organization’s existing hardware and software systems, leading to minimal capital expenditure.”

According to Sun, video surveillance customers are security focused; and require secured on-premise; private cloud solutions in addition to public cloud based VSaaS solutions. “Most customers are reluctant to send sensitive security surveillance video to the public cloud; hence private cloud is the preferred architecture,” says Sun. The benefits of the product include manageable video surveillance infrastructure with point-and-click interface, flexible deployment of video computing resources, and powerful big data virtualization platform. “Leveraging the power of CityEyes, we can scale from hundreds to tens of thousands of IP cameras in a single site,” asserts Sun.

“Another key feature is our multi-tier storage architecture that can optimally store videos from 30 to 180 days and more. The storage capacity is scalable from tens of Terabytes to Petabytes in a single system.” It also offers the capability to monitor, detect and alert malfunctioning cameras, camera tampering, out-of-focus cameras or other camera faults, and accurately identify video cameras that are offline due to hardware or system failures.

IronYun’s prowess in VMS is best illustrated at the New Taipei City police department based in Taiwan. The police department in New Taipei City managed more than 25,000 video surveillance cameras with a legacy system that was difficult to maintain, and scale. The CityEyes solution helped automate most of the hardware camera maintenance with the private cloud solution. Now, the city can scale up the number of cameras and storage devices in a single, seamless architecture. This has resulted in a saving of about 40 percent of the total cost of ownership in its first year of implementation itself.

It is pertinent to mention that the company invests heavily in R&D and secures its intellectual properties alongside working hand in hand with the world’s top research universities and R&D centers and their partners. For instance, the flagship product, CityEyes, is the result of over $30 million invested in R&D over four years. “To-date, we have over 30 patents in the field of computer vision, cloud computing, big data and vision algorithms. We are en route to lead the ‘enterprise video infrastructure management’ industry in the upcoming years,” concludes Sun. 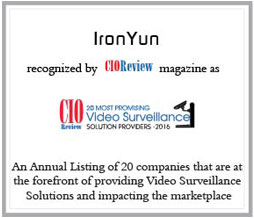