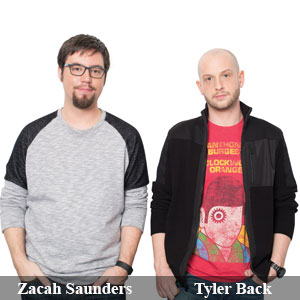 Zach Saunders, CIO and Tyler Back, Co-founder and CEO
It was just like any other day at the trade show—the perfect blend of business, creativity, and utter chaos on display for the world to see. As the event was about to come to an end, an exhibitor decided to announce the lucky draw winners through the digital signage next to his company’s stall. To put it in action, the signage manager had to run to the command station and once there, he realized that the modifications would take time and cost extra. Minutes into the process of designing, comparing slide resolutions with different displays, quality checks, and making payments, he receives a text on his phone saying the announcement was already made on the mic due to the delay. If only they had a way to change their digital signage in real time without having to pay extra or worrying about the output resolution—a solution that would allow them to design and redesign their digital signage via mobile devices or any other device. Had they looked harder, there was one ultimate solution that could have helped them mitigate all their challenges: Exclaim Digital Signage, the brainchild of Meiosis, a leading CRM solutions provider. “When we came up with Exclaim, our goal was to build something that could really push the boundaries, shake up the digital signage space, and challenge people to think differently,” says Tyler Back, the co-founder and CEO of Meiosis.

For the last 20 years, global enterprises have approached digital signage with a hardware perspective in mind. Not only was the design process time consuming and costly, but the product quality in itself was low and was not compatible with all screen resolutions. As such, making changes to the existing signage systems or scaling it for displaying the content on multiple screens would again demand an influx of investments. Additionally, it required constant technical assistance and management centers, which was not feasible. Enter Exclaim Digital Signage, a resolution-agnostic cloud-based software-as-a-service solution, which enables exhibitors to seamlessly create, modify, and display the signage on any platform.

When we came up with Exclaim, our goal was to build something that could really push the boundaries, shake up the digital signage space, and challenge people to think differently

The uniqueness of Exclaim is that it allows users to feed the signage to any hardware without having to enhance or decrease the resolution. The output quality will not change if it’s a smartphone screen or an 1920 X 1080 display or even a large concert installation. The product can be powered by any PC and can be accessed through all major browsers. With the added advantage of having a built-in chrome cast extension, clients can cast it once, feed the playlist and execute the signage without having a system tethered to it at all times.

While the frontend encompasses an array of features to design the content for the signage, the backend allows users to manage it with a full content management system. The designing options include various fonts and animations which can be used to create messaging slides, image slides, video slides, video playback, and website URLs. Additionally, there is a WYSIWYG editor that facilitates exhibitors to get a glimpse of the final output. Meanwhile, the backend system has a built-in transition to handle redesigning and make it readable across any desired resolution size, eliminating the requirement to re-create or duplicate content.

To ensure absolute customer satisfaction, the firm offers tech support via e-mail and design support to any enterprise requiring it. “We take clients’ feedback very seriously and based on their requests, we roll out newer features and upgrades every six weeks, which are entirely free,” says Back.

Management
Zach Saunders, CIO and Tyler Back, Co-founder and CEO 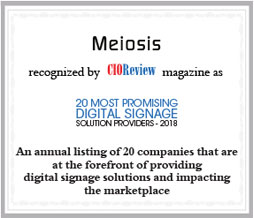 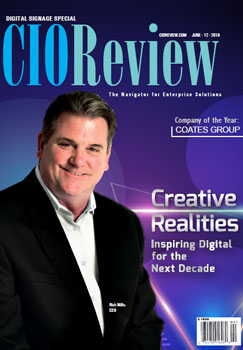