Tsachi Frishberg, Head of SMART Solutions
Although the vision is as exemplary as it can get, adorning cities with the “smart” tag is a task so intricate that it calls for a number of “smaller things” to be taken care of, for the “big thing” to fall in place. Modern future-proof infrastructure that pertain to connectivity, energy distribution, security and surveillance, and traffic management to name a few, need to have the capability to interoperate intuitively and seamlessly and scale in tune to the rising demands of a city and its residents. Rendering a city smart thus calls for the highest levels of collaboration between its governing bodies and technology providers. This heightens the need for entities that are capable of orchestrating multi-pronged, multi-level solution implementations. “Today, as rapid digitalization has led cities to embrace the smart-city trend, MERGroup is ready to support them with not just the technology stack but also with the ability to integrate them into one working solution,” says Tsachi Frishberg, Head of SMART solutions at MERGroup.

From being a worldwide integrator in the fields of communication and security, MER has repositioned itself as an all-round expertise provider for implementing smart city initiatives. The company develops its own robust ecosystem of technology partnerships with players such as sensor makers, telecom or connectivity providers, data analytics, and security vendors.
From MER’s innovation lab comes Smart-M, a top-of-the-line Command & Control Management Platform that is constantly reinvented in correlation with advancing technologies and the changing security landscape.

As rapid digitalization has led cities to embrace the smart-city trend, MER is ready to support them

“We provide a turnkey solution that covers the entire range of services: from providing the actual infrastructure (if it is not sufficient for the project requirement) and the sensors to the command & control management platform.

Thanks to MER, a Caribbean island was able to transform its surveillance infrastructure to minimize the city’s crime rate. The island has been implementing more of the company’s solutions including their smart-city analytics inferring insights—through cutting-edge, scalable BI tools, and KPI measurements—from the data collected through relevant sensor infrastructures.
Having established itself as the go-to smart-city solutions provider for a plethora of clients across several countries, MERGroup plans to sharpen their technology expertise and reach further. The company continues to enlarge and empower their partner ecosystem while they invest more on fine-tuning their analytics capabilities for gaining smarter insights that drive smarter cities. 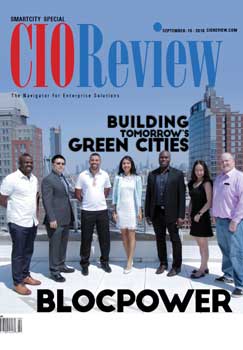