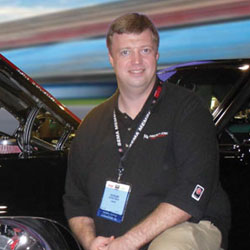 Tad Nelson, Managing Partner Men love supercars, however, a different stripe of them take pleasure in working on something finer, exotic and enthralling—restoring classic cars. Tad Nelson, Managing Partner, Tad Nelson Consulting (TNC) is one of such men, for he unites the beauty of a classic car with today’s state-of-the-art technology. The end result of such an undertaking is an enticing 1965 Hurst- Themed GTO with an Edelbrock supercharged Corvette LS3 engine under the hood. Having restored cars for more than 20 years, Nelson is adept at the art of dismantling a car, picking the best parts, and putting it back together. “I do the exact thing during a migration. I envision the possibilities and endpoints, and go with the most apt option that gives desired result,” says Nelson. If the car Nelson builds as a hobby is of such high quality and grandeur, it is not hard to imagine the class of his work as a full-time business consultant.
With a goal to streamline operations and increase the overall efficiency of businesses, TNC is a global systems integrator that specializes in Microsoft and Citrix platforms. The company leverages its many years of experience in system migrations and consolidations to analyze the client’s environment, determine the needs, and make the best recommendation—taking business performance to the next level.

On the surface, TNC might look like a run-of-the-mill consulting company out of Morris, Illinois, but it is different on so many levels. Led by Nelson, a Microsoft Certified Professional since 1998, TNC is a team of 21 people who have been developing experience in Office 365 migrations since the last two years. “I have worked on virtually every email platform in existence,” says Nelson on his extensive experience, and supreme confidence in his team’s ability to always offer clients the best available solution.

At a customer site, TNC’s team ensures that the solution deployment is always of the highest quality possible, while educating customers on their options to make the right decisions for their businesses. “Our goal is to be a trusted advisor; we make sure that a customer’s foundation is set for the future. At the very end, the sight of a completed migration and a happy customer is very rewarding, akin to seeing a classic muscle car restored to its former glory and splendor,” says Nelson.

"We have the ability to achieve seamless coexistence and transition no matter what the situation is. You will never walk into a Tad Nelson Consulting environment and find that it was set up incorrectly"

“Planning is everything. If you do not plan a migration appropriately, then you might as well plan to fail,” states Nelson. Equally important is the ability to identify “gotchas” and understand how the planning gets one from point A to B.

To make sure that he and his team are on the same wavelength, Nelson puts them through thorough hands-on training before they are out in the field.

Planning is everything. If you do not plan a migration appropriately, then you might as well plan to fail

TNC follows a strict project methodology that many would consider to be cumbersome and overkill, but at the end of the day, it is what removes the blinders and gives IT teams an all round view of their environment. This methodology leverages the Microsoft Operations Framework and Microsoft Solutions Framework, while being aligned with standard Information Technology Infrastructure Library (ITIL) practices.It all begins with an Envisioning phase where TNC kicks off the project, and ensures that business drivers are clearly understood and the requirements are met, while delivering a high level project and communications plan. “Migration is not something that customers go through every day. They don’t always know the pros and cons,so we sit down and explain what the end user’s perspective is going to be with examples,” elaborates Nelson.

Next is the Planning phase where the bulk of the work takes place—functional specifications, solution design, current state analysis, cost estimates, and project plans are prepared and approved. TNC’s team also gets a good understanding of the current environment and makes certain that there are no other ongoing IT projects that could cause a conflict. The company then goes into the Building phase, which comprises of developing the components necessary to achieve coexistence, preparing a migration plan, and building the necessary products. “We have the ability to achieve seamless coexistence and transition no matter what the situation is. You will never walk into a Tad Nelson Consulting environment and find that it was set up incorrectly,” asserts Nelson.

The final two stages are the Stabilizing and Deploying phase. In the Stabilizing phase, TNC tests the proof of concept and pilot users, makes sure that the builds are well-documented and the environment is stable. Additionally, they also test the migration procedures document and finalize them. In the final phase, the company deploys the core solution it developed, implements all the components into the production environment, transfers product knowledge to the operations and administration team, and winds up the final project documentation. Unlike their competitors, TNC documents every click of the migration process, so it effectively acts as a disaster recovery document, as the need arises.

“With our go-to-market strategy and proven methodology, we can step into any type of customer and help them move forward,” says Nelson. Standing as a testament to that statement is TNC’s most recent milestone. The company performed 100 Office 365 deployments in the last six months and it reproduced this methodology for each of those migrations. To top it all, the firm offers free level 3 assisted support for Office 365.

A Challenge? Bring It On!

Oftentimes, when a company goes on an acquisition spree, the result is a number of different systems that do not talk to each other. In one such instance, a customer of TNC had Exchange Server 2003 at one site for about 4000 users, Lotus Notes for 8000 users, and Novell GroupWise for an additional 3000 users, bringing the tally to nearly 15,000 users on 3 different messaging environments. Instead of hiring a consultant, the company decided to take the task into its own hands. While this did not turn out to be a bad decision, efficiency went south. Later when TNC stepped in, it spent more time cleaning up the address books and mail connectors than doing the project itself. Nevertheless, TNC was able to seamlessly migrate 15,000 users to a new Exchange organization under eight months with only a lean project team. Like the one above, TNC has an excellent track record and references from many different sized clients like the Lincoln Center for Performing Arts, Great Clips, Eddie Bauer, Children’s Theater Company, University of Oklahoma, Albany International, The Bergquist Company, and TECO Energy. With the retail industry wanting to streamline their operations and utilize SharePoint to the fullest, the company is seeing an increased traction for its solutions in the retail, as well as the manufacturing industry.

”We have the ability to achieve seamless coexistence and transition no matter what the situation is. You will never walk into a Tad Nelson Consulting environment and find that it was set up incorrectly”

Having done some impressive largescale migrations in recent past, the company’s honcho poses a question to the CIOs, “Would you like someone who has done 100 Office 365 deployments in the past six months and moved 30,000 mailboxes to the cloud? Or would you like a larger company that may have done 100 on-premise and three cloud migrations and only moved maybe 6,000 mailboxes to the cloud?” This is not different from taking a car to a mechanic who identifies the problem in a single test drive, which is not always the case with a large dealership. An aspect that makes working with TNC better as opposed to a large company is that the latter tends to outsource the implementation. “With TNC, the guys that step onsite from day one are usually the guys you are working with throughout the project,” says Nelson. The company also has knack in bringing something new to the table that wins the CIOs over, nine out of ten times. Regardless of how crowded a market is, the quality of work delivered by Nelson and his team makes TNC stand out.

“We are very anti-change order,” states Nelson. Change orders are a result of poor planning and improper scoping, and there is no place for either of those at TNC. Being tool agnostic, the company is able to think outside the box and present a number of options for customers to look at and make the right business decisions. About the company’s future, Nelson distills down to one word—growth. TNC is continually developing resources internally and hiring new talents to better serve the clients and be their trusted advisor. With Microsoft Azure gathering steam, the firm is also excited about being actively involved in moving companies’ server operations to the cloud. 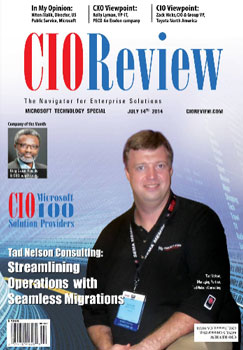