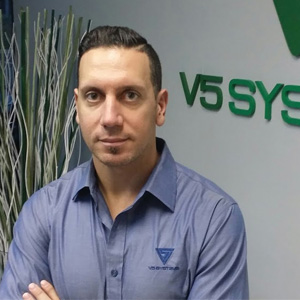 Mazin Bedwan, President
In June of 2016, detectives from San Francisco’s Bay Area Police Department were dealing with multiple drive-by shootings. Not a single witness or existing security camera was able to identify the suspect, who was operating in an enlarged area with a radius of approximately 10 square miles. Sensing the ineffectiveness of existing surveillance systems that were either stationary or too bulky to be effectively mobile, the department turned to a first-of-its-kind security system that could be configured and installed in under 30 minutes. Shortly after the first deployment, the culprit continued to move, unaware that this new technology was able to be moved as well, enabling the police to tighten the net on him. Based on the HD video and gunshot detection from this breakthrough technology (V5 Portable Security Units), law enforcement now had enough evidence to identify and apprehend the perpetrator. He has now been charged with 10 counts of attempted murder.

The company behind this game-changing innovation is V5 Systems, a technology powerhouse headquartered out of Fremont, CA, in the heart of Silicon Valley. Their Portable Security Unit is just one of many applications that can be customized on their open platform. “Our partners benefit from a newfound ability to rapidly deploy sophisticated computing and security solutions in areas that they otherwise would not be able to because of the lack of power or trenching and permitting challenges,” states Mazin Bedwan, President and Co-Founder of V5 Systems.

V5 Systems has forged symbiotic relationships with much bigger co-inhabitants in the outdoor Industrial IoT space, such as, Dell, Nvidia, Intel, VMware, Oracle, and Axis Communications. “Today, what we are seeing is that the innovation built around our power system, and our willingness to open up our software platform to third parties, changes the dynamic of who our competition is,” notes Mazin Bedwan. “We are currently working with companies that could have been viewed as competition or even a major threat early on, but are now part of our ecosystem. We are growing our businesses together.”

V5 Systems’ core technology is a self-powered computing platform that is specifically designed for outdoor IIoT. This technology is the basis for their three product lines: Edge Power, Edge Computing, and Edge Security.

Today, accessing power, data connectivity and communications in the outdoors are major hurdles for customers or systems integrators. Powered by solar, wind, and AC/DC, if feasible, V5’s Edge Power is a power source suited to perpetually keep today’s sophisticated electronics running in virtually any outdoor environment.

“V5 Systems is uniquely positioned to be a leader in this industry because we deliver the entire IIoT Stack, both hardware and software, that takes computing, software solutions, and sensors to the outdoors. All of this is delivered on the V5 Systems Portable Edge Computing Unit (PECU),” Bedwan says.

V5 Systems is uniquely positioned to be a leader in this industry because we deliver the entire IIoT Stack, taking computing and sensors to the outdoors

V5 Systems’ PECU is the world’s first solar-powered, wireless outdoor edge computing unit, a data center that can be deployed in any outdoor environment. These units can perform analysis on the edge with both Nvidia-based ARM processors and Dell Industrial IoT Gateways that send collected sensor data back to its users or the cloud without being restrained by power or data cables. Bedwan says, “We run our own software on this platform, add our own security-based sensors (video, acoustic and chemical) and deliver products into the market that solve many of today’s outdoor security needs.” Because V5 Systems is looking at this industry with partners in mind, the solutions that can be developed do not stop in the world of security. Bedwan goes on to state, “We have an ecosystem of partners and we are eager to work with them so that they can now run their own validated software on this platform, add whatever sensors are important to them to solve for innovative Industrial IoT applications and solutions.”

Finally, the V5 Portable Security Unit (PSU) is a self-powered, multi-sensor security system armed with HD video, LPR and PTZ cameras, and acoustic tracking sensors. The V5 PSU is surprisingly small, just 24 inches long and weighs 25 pounds. It can be deployed in any outdoor environment in under 30 minutes. Having already showcased to the world what their award-winning PSU is currently capable of, V5 now looks at taking the game to a whole new level with a parallel strategy approach. The company plans to roll out, by the year-end, a solution integrated with chemical sensors that could detect methane, ammonia, and chlorine. In addition to adding sensors, V5 Systems has taken a sophisticated approach to furthering the development of their edge-based analytics. Bedwan states, “We are now expanding our V5 Edge Analytics capabilities with self-learning deep neural network sensors, which is essentially implementing AI at the edge.” V5 Systems continues to operate within a very partner-centric business model. Bedwan goes on to say, “We will launch a Camera Agnostic Platform (V5 CAP) that will allow third party integration of virtually any camera onto our platform so all of our partners can extend their opportunities to the outdoors.”

“We aspire to become the de-facto platform for IIoT computing and sensor applications, and will succeed as such by being a leader in innovation and product development,” states Bedwan. As the Platinum Award Winner of Dell’s first-ever IoT contest, ‘Connect What Matters 2016’, the company’s aspiration is clearly justified. V5 Systems intends to expand their footprint from a growth perspective in 2017. They will open new offices in Bangalore, India, an acoustic sensor development in Nashville, and a sales and marketing office in Las Vegas. 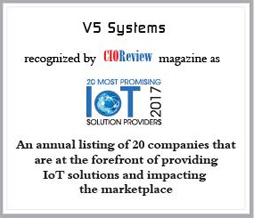 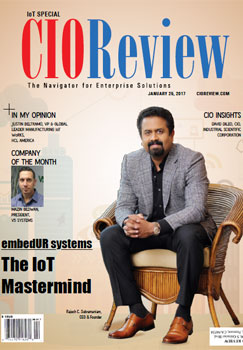