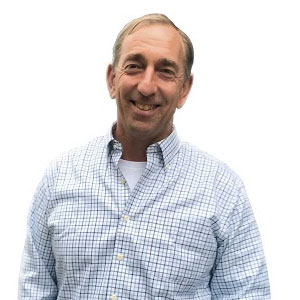 Robert Rizika, CEO We are all mostly familiar with Arthur C. Clarke’s supposition that “any sufficiently advanced technology is indistinguishable from magic.” This “magic” comes from our inability to clearly see cause and effect. When the seams disappear, the mind turns to magic.

At the beginning of mass-market computing, the device and the network were separate and differentiable. As both evolved, the boundaries between these core components gradually faded. Still, we have a pretty clear concept of the things we can do locally, and the things that require the cloud. Edge network magic is about to make this separation disappear, right before our eyes.

Most, if not all, of the promising new technologies on the market—augmented interfaces, deep convolutional analysis, IoT, intelligent robots, autonomous vehicles, massively multiplayer VR gaming—require the network to evolve quickly in four dimensions: latency and throughput performance, real-time analysis loops, compartmentalized security, and localized efficiency. Simultaneously, businesses are demanding more granular targeting of individual consumers, more locally-appropriate business models, and more assistance in new market penetration. All of these network evolutions share one stunning commonality: innovation at the service provider network edge. We built VidScale to do exactly that.

It's hard to get excited about CDNs, and it's even harder to recognize that these solutions were the first step in transforming the service provider edge into a critical network catalyst for broader innovation—but this is precisely true. The performance requirements of video playback necessitated service-provider edge solutions, which consisted largely of content caches placed superficially around the world at local operator edges. The business relationships behind these solutions rarely brought benefit to the operator, beyond ensuring QoS for their subscribers. For this reason, there was little to no privileged access or cooperative optimization of these cache solutions, and certainly little to no joint innovation.

Today, the requirements of video alone have outgrown most traditional CDN solutions. Larger, more complex media types (like UHD HDR, 360 Video, and VR/AR/MR), demand for a multiplicity of local business models, and requests for market entry assistance have revealed the benefits of a deeper level of CDN integration with the operator edge. They also highlight the need for a cooperative business model based on shared upside. VidScale works around the globe as a trusted partner of the world’s largest operators, unifying their privileged edge networks to the advantage of content owners and distributors, big and small. Video, however, is just the tip of the opportunity iceberg.
Extending Cloud to the Edge

The concept is pretty simple: go beyond putting cache at the edge. Take significant compute of all different flavors, along with storage, and integrate them tightly and deeply into privileged operator edge networks. Then, combine the power of all these disparate edge compute instances on a single, global platform. Finally, allow developers to build and intelligently deploy applications wherever they make sense, from the center of the cloud all the way up to, and including, the edge itself. Hundreds of service providers share the platform’s upside, and act as true partners to VidScale and application developers.

VidScale does not replace AWS; it simply extends its capabilities to the edge

The ability to deploy applications at the service provider edge has many benefits, neatly divided between two categories: edge proximity, and carrier services. Edge proximity benefits include latency and throughput performance, real-time analysis loops, compartmentalized security, and localized transport efficiency. Carrier services benefits include localized business model support, demographic targeting, market entry assistance, and access to unique service provider technologies like billing integration and LTE broadcast. In this article I will focus on the former, and save discussion of integrated carrier services for another day.

Make no mistake—the success of nearly all of the next generation of mass-market innovations will depend upon our ability to deploy and commercialize these edge features. Here's how.

The mammalian reflex response to noxious stimuli is amazing. Touch something hot, and the pain signal races to your brain. Before it gets there, it splits and the proximal portion locally activates the appropriate muscle groups to move your hand away, before you realize something is wrong. It’s adaptive evolution at its best, and it's all about signal latency.

Most of our current interactions with cloud begin with a human-based inquiry or request, and end in serving that request. The increasing capabilities of deep convolutional neural networks are ushering in a new network reality —the ability to automatically sense physical reality, analyze the data in "real-time" and effect a change—a “Real-time Analysis Loop.” In many cases, these decisions need to be made in a few milliseconds, something not possible with today's network. All that changes when the analysis itself occurs inside the operator edge. Who needs this kind of real-time analysis? Autonomous vehicles and drones with more efficient cloud-based sensor analysis, augmented reality interfaces that sense the user's surroundings and relay data in real time, operational command and control of precise industrial equipment like turbine fan blades, or any application based on leveraging IoT sensor data to perform time-critical analysis and response. VidScale's edge compute platform enables a literally endless number of next-generation latency-sensitive, and or analysis-dependent applications that cannot be deployed on services like AWS.
VidScale does not replace AWS; it simply extends its capabilities to the edge.

Over the next few decades, the number of new devices added to the global network will greatly surpass today's total. Some have estimated that this number will increase by an order of magnitude in this time. Many will be IoT devices continuously capturing data inside our homes and businesses.

This connectivity trend poses two challenges. First, the sheer number of new devices, particularly “dumb” IoT devices, poses a severe DDOS bot threat. In 2016 a DDOS event leveraging this IoT infrastructure sustained data flood rates measured in terabits per second, and was able to collapse entire sections of the internet. One can only imagine the extrapolated risk given hundreds of billions of additional connected devices. The ideal, and likely unique, solution to containing damage is to prevent concentrated regional recruitments from spreading beyond the network edge. VidScale’s edge distillation security solutions do just that, preventing massive DDOS traffic from spreading beyond the edge, thus preserving the viability of the network at large.

The second challenge is data confidentiality. Billions of devices, recording confidential information inside homes and businesses, and continuously shipping this data across the internet, is antithetical to privacy. Keeping the sensitive parts of that data at the service provider edge—or even on premises with a “deep edge” in the case of hypersensitive business applications—is a common-sense step towards privacy best practices. VidScale’s platform allows application developers to do this with ease.

Efficiency goes hand-in-hand with privacy. Many of today’s IoT devices are grossly inefficient when it comes to network resources. Take home video surveillance as an example. Many of the most popular solutions record 1080p data 24X7 and send this massive data stream to a server across the country. If solutions like Nest Cam were as popular as Netflix in the U.S. (which accounts for about 30 percent of internet traffic), this onslaught of data would consume 300 percent of current U.S. network capacity. Worse, most of this data is neither viewed, nor analyzed to any effect. Enabling application developers to deploy applications using network edge resources keeps the data traffic local, and is a massive step towards supporting the future sustainability and economics of IoT.

"VidScale works around the globe as a trusted partner of the world’s largest operators, unifying their privileged edge networks to the advantage of content owners and distributors"

The Edge of Innovation

Description
A pioneer in the edge-to-edge application deployment space. 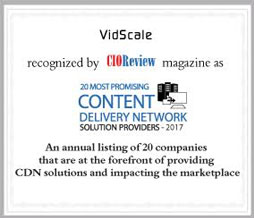 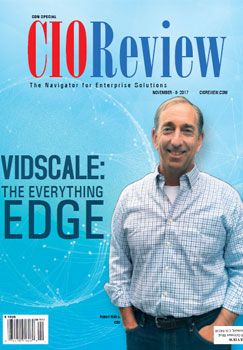