Matt Rizai, Chairman In the 1990s, Workiva [NYSE:WK] CEO Matt Rizai already had big plans with the coming-to-age of the Internet. His company at the time, Engineering Animation, was developing enterprise-level communication and collaboration software for the design and manufacturing industries. More to the point, they looked to gather a population of designers and engineers around the world who, due to geographic limitations, ordinarily wouldn’t work together. They combined what they knew to create a piece of technology that was placed in the intranets of companies, allowing them to view cumbersome product data and collaborate in real-time.

Today, Workiva has shaped itself to what Rizai knows best— analyzing complex data. Rizai’s focus has shifted from product data to unstructured and financial data that customers can access from their phones or computers and view as easily as they would look at content at home in their free time. It’s in continuing their extensive work with data that Workiva’s seasoned technology experts still find common pain points in the market. In fact, right now, there is so much unstructured data being created that current systems can’t use it on a day-to-day basis, change it, and create the transparency to see who’s doing what. At least, not without help.

Workiva has a history of breaking ground in IT. In 2010, the company released its first cloud-based solution at a time when the cloud wasn’t really trusted. In the same year, they were the first company to automate the reporting process after the U.S. Securities and Exchange Commission (SEC) adopted amendments requiring companies to provide their financial statements in interactive data format using XBRL. They’ve taken their next big step with Wdesk, a productivity platform that is currently being used by more than 65 percent of Fortune 500 companies.

Wdesk is a proprietary platform that comes with word processing, spreadsheet, and presentation applications integrated and built around Workiva’s data management engine. It bolsters features such as the paper trail, allowing users to attach and connect PDFs and other documents to workbooks, which are spreadsheets in Wdesk that let users view changes made to every cell by each user collaborate with others in real-time, and change around permissions so that one can determine what cells are able to be viewed, edited and controlled.

The paper trail also allows users to request documents that need to be attached to specific portions of the workbook.
With its substantiation feature, users can ensure those documents match the source documents before passing them along to stakeholders. Additionally, Wdesk has another feature called Binders, which allows changing the way board reports, executive books, and other complex documents are viewed. Through the Binders feature, users can distribute their electronic reports easily in Wdesk’s cloud-based system.

The cloud enables Workiva to push a new version of the Wdesk platform several times a week, and customers don’t even notice it. In a way, the platform is a proof of concept for Workiva, who wanted to see how it would work in a community where a wide variety of people strive to deliver important information under pressure such as the SEC filings.

Working with Governance, Risk and Compliance

Of its client base, over 2,400 Workiva’s customers are companies that make use of Wdesk for a wide variety of risk, compliance and management processes. “It’s very important for our customers to mitigate risk and have a transparent operation that’s automated as much as possible,” explains Rizai. This is where legacy technology can sometimes struggle, as some feel they’re complicated and otherwise inaccessible. The key trend for Wdesk is, again, to create an experience at work that mimics the simplicity and familiarity of personal computer usage.

Workiva’s clients want universal access, mobility, real-time collaboration, and the ability to get all of the data as quickly as possible, while having a high performance platform. Wdesk is able to deliver that across multiple industries through acting as a mitigated system that lets its users create data, define risk, and have narratives to ensure they go with the risk matrices. All of the above can be put together to see if they’re compliant and match up, making the platform scalable, flexible, and appealing across a wide variety of industries. Currently, Wdesk’s solutions cover government reporting, internal controls, section 16, SOX, CCAR, stress tests, enterprise risk management, environmental health and safety, ORSA and a few others.

It’s also in this area that Workiva gains a lot of traction. “Whether in health and safety, finance, accounting, or IT, the overall governing aspects of everyone’s risk and compliance processes are very similar because they all have to adhere to rules and regulations,” explains Rizai. By identifying common pain points across these industries, Workiva has put Wdesk in place as a flexible software that be used for board, managerial, and corporate reporting as well. Aside from simply offering up Wdesk as an ahead-of-the-curve platform alone, it can also be accessed on mobile devices with increased security to show clients that they care about their personal information.

“Many large corporations entrust us with their most sensitive data, and we take that responsibility very seriously,” explains Rizai. Workiva employs stringent data security, liability, integrity, and privacy practices at every level.
The security of its operations are subjected to aggressive penetration tests and further validated by their annual completion of the SSAE 16 Soc 1 Type 2 testing. They have their customers audit their security so that they can communicate with them and come to an understanding on both sides. Workiva’s priority on security goes hand in hand with their consistent overall philosophy of customer comfort.

There are numerous examples of how software like Wdesk can have a tremendous impact on a day-to-day business. One airliner sought out Wdesk to make their business operations more efficient, mitigate risk, and ensure that they weren’t just getting big data—but the right data. Through implementing Wdesk, they managed a 187 percent return of investment, which cumulated to more than $400,000 in cost savings and benefits over the course of three years. They reaped huge benefits from simplified sustainability reporting as well, which came as a result of using Wdesk.

Despite stories like these, Workiva continues to remain humble and employ their strategy of providing environments that garner satisfactory results and build customer relationships. So far, they’ve managed a 95 percent customer satisfaction score and 96 percent revenue retention rate. In fact, at their last user conference, they had more than 1,500 attendees from nearly 800 companies who viewed around 28 different types of use cases of Wdesk. Even more profound is the impact that this software has had on the data of its user base. Workiva recently announced that approximately a billion data values have been linked by their customers inside Wdesk.

It’s evident that the regulatory environment won’t go away, but will rather continue a trend of becoming
Workiva’s roadmap continues to be their automation of rigorous processes and mitigation of the risk factors of human error.

Workiva believes that it’s their responsibility to keep people comfortable with using technology at their jobs. It is this core philosophy that has brought them tremendous success in the world of business data management.

Description
Provides a cloud-based productivity platform for enterprises to collect, link, report, and analyze business data with control and accountability. 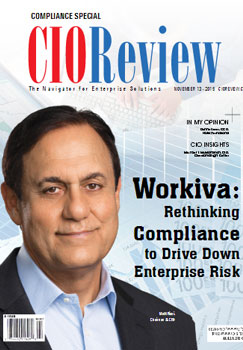