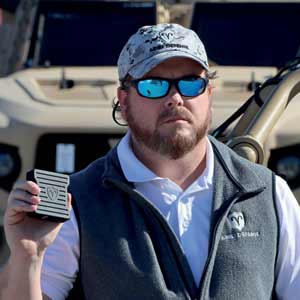 Douglas J. Pillsbury, CEO & President
After facing a full-fledged, gut-wrenching pandemic that affected the whole world, every business has a story to tell. While some of these stories indicate the sudden halt of companies, some demonstrate the survival of organizations that resisted giving up and found ways to beat the adverse situations created by the COVID-19 pandemic. Many companies went on to rise above the challenges they had to face. One such technology company operating in the law enforcement sector that outshone others when it came to adapting to the changing scenario amid the pandemic is Aries Defense.

As a provider of tactical video solutions that play a critical role in the defense sector and empower the military forces in surveillance, Aries Defense had no other choice but to figure out how to survive. Rather than stopping production, the Aries Defense team decided to step up and continue its operations remotely. The company continued to innovate and introduce technologies that could further bolster law enforcement officers’ capabilities.

The biggest challenge in front of the Aries Defense team was how to find a way to engage with its customers. Having already planned a couple of roadshows and events that had to be canceled, the company had to rethink its strategy to reach out to its clients. “That’s when we created a demonstration room. We used our technology and Zoom, put our camera systems in the room, and started giving presentations,” explains Douglas J. Pillsbury, CEO, and president at Aries Defense. At the time, the company even helped address a problem that prevailed in the law enforcement sector for ages—situational awareness. The Aries Defense team was on the lookout for an innovative solution to the problem as the officers needed more information in particular situations that they were facing. While the problem wasn’t new, the solution provided by the company was indeed unique and innovative. The company created small, light-weight computer systems that enabled law enforcement officers to see a video or a digital picture of what was happening during a specific scenario.

OverWatch, a Technology for Real-time Surveillance

Another critical project that the company took up during this phase was with The Federal Bureau of Investigation (FBI). Aries Defense recently delivered one of its flagship products, OverWatch, to the FBI. “One of the big integrations we did with the FBI was taking the live feed out of a digital tool mounted on a SWAT members’ rifle. We took that live coverage and put it in the command center on a tablet device,” adds Pillsbury. As OverWatch is integrated with Android Tactical Assault Kit (ATAK), it broadcasts the live feed to all the FBI’s ATAK users. It allows all the users to view the same data in real-time, which proves significant for the decision-makers. Another factor that makes OverWatch stand apart from other solutions is its ability to raise an alert in a scenario when activity occurs given the camera. OverWatch allows the officers to monitor the scene and notifies them when something of interest happens by broadcasting that information across the networks. As opposed to the traditional approach where one person keeps a watch on a building, OverWatch multiplies that person’s awareness and pushes it across the network systems. The first layer of the system’s analytics looks for change detections at the site, including people walking by the cameras and lights turning on. However, the next focus areas for the company are even to identify fire-ons and objects left behind. Emphasizing these capabilities and the various features that OverWatch boasts, Pillsbury adds, “Had OverWatch been in place at the time of Capitol breach, everyone in the network would have immediately known as opposed to waiting for someone to call.” After all, a person watching a video feed or receiving a live feed from an event will have a much greater picture than a person trying to explain the situation to you over a phone call or radio.

And that is the reason Aries Defense’s solutions have found a vast client base with the ability to provide a real-time view of a situation so they can respond appropriately and the crucial information that doesn’t get lost in data translation.

Aries Defense’s technology also proves critical for law enforcement officers when they have to gather information from a site. As opposed to body-worn or dash cameras mounted on police vehicles that can be reviewed later on, Aries Defense’s technology provides a real-time view of that situation. When the officer gets out of the vehicle or tries to gather information, the technology allows them to capture pictures and videos from a distance while also taking them away from the immediate danger in that specific situation.

The company has delivered these capabilities to military and law enforcement agencies over the years with consistent support and efforts of its professionals, who have either served in the US military or have experience in assisting the military and law enforcement agencies. The team at Aries Defense is comprised of professionals with different backgrounds and specializations. “But we all have commonalities and skill sets that overlap in some areas as well. So, we work together as a team extremely well because there is never one or two people that can do a job, we all do it. We really take on things as a team,” adds Pillsbury. The company also organizes sessions with its teams to talk about objectives and obstacles. It gives everyone a chance to see if they have some background in that particular area and can provide some insight to some of the junior teammates if they are stuck with a problem. The team’s collective experience and knowledge, coupled with the company’s technological infrastructure, proves significant for Aries Defense. Ever since its inception, Aries Defense has operated as a team that heightens its focus rather than getting distracted in the face of adversity, and that has been a significant differentiator for it.

Over time, the company has gathered extensive experience in extending support through its tactical video solutions in case of both human-made and natural disasters. The firm has even been able to develop a solution called VULCANE that gives officers the ability to drive day and night without lights. VULCANE is a visual augmentation driving system that has a significant role in instances where it’s impossible to look out of a window in a vehicle with bulletproof glass. “At times, it’s nearly impossible to look out of the window at night especially if you have light at a distance,” adds Pillsbury. In such cases, VULCANE offers the driver the ability to view high-resolution visuals and drive. VULCANE is a significant release of Aries Defense, which indicates its key focus areas for the future—augmented reality and artificial intelligence. These are the technologies that Aries Defense will be pursuing to enhance its portfolio further. “We have spent the last few years focusing on the ability to transport video and other data over small bandwidth but what we want to do in the future is to employ AI and AR so that we can overlay information on the video feed. This would allow us to present the officers with additional information or identify possible threats,” concludes Pillsbury. 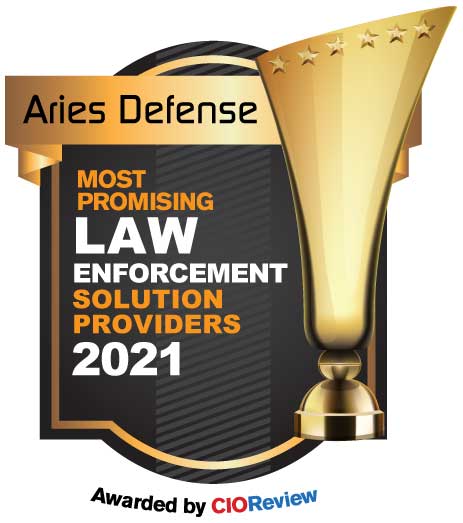 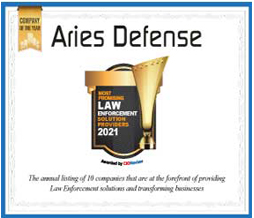 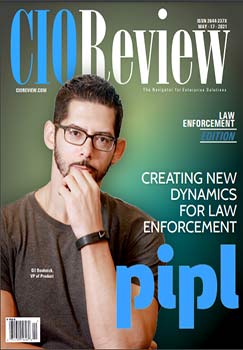