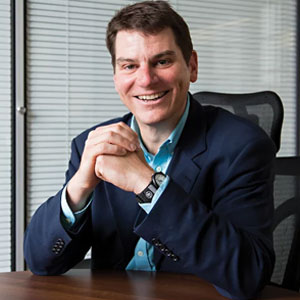 Stuart Miller Co-founder & CEO In a quaint old town, along the muddy trails, a field service engineer found his destination in the sticks—a mom-and-pop bakery. His job was to dismantle a faulty part from the store’s machinery and place it at a designated point in the supply chain, from where it would hitch a course of journey to the technician or the Original Equipment Manufacturer (OEM). This was the case—or is still the case in many regions—where an OEM or any other technology service provider has to expend a substantial quotient of funds on field service engineers just to set the wheels in motion. “The definition of a field service engineer’s role is ever changing,” asserts Stuart Miller, Co-Founder and CEO, ByBox. “OEMs and technology providers are scouting for new ways to engage the end-consumer deeper within the field service process chain,” he adds. Changing the rules of engagement in the field service terrain, ByBox has crafted a dramatically modernized semi-automatic supply chain mechanism. The company has taken the vanguard to a fundamental restructuring of the traditional field service archetype, by enabling OEMs to cater to their customers in short time—amidst a horde of barriers—through a collective disruption of field service software, technology, and infrastructure.

Of all, Miller identifies equipment availability, secure conveyance, and timely and reliable delivery to be challenging bullets that OEMs are trying to counter while reaching out to their end-customers. Under the leadership of Miller and co-founders—Steve Huxter and Dan Turner—ByBox’ team has travelled the whole nine yards to design a software platform, and a high performance distribution infrastructure that entwines it. Adept at making informed decisions, the indigenously built software, Thinventory™, suggests quickest and logical routes for the equipments along the distribution network.

“As a holistic end-to-end software platform, Thinventory™ integrates the workflows of suppliers, customers, logistics companies, and field technicians, directing equipments all the way—to and from—its suppliers and qualified engineers or the end users,” explains Miller. Upon data tagging a part faulty, the engineer replaces it with a brand new part and puts the faulty part into a locker network, named SmartBox, to be collected by the end customer. On the other side of the equation, the moment a defective equipment hits the distribution network, it is automatically routed to the repairer. ByBox’ elaborate analytical algorithms are designed to automatically direct the equipment to the technician who falls next in line in the process chain. ByBox has termed this the ‘virtual warehouse.’

Adding a layer of transparency, “the engineer can capture the condition of the part at any point, by scanning the label/barcode on the Thinventory™ smartphone app upon receiving it and later track and trace it,” elaborates Miller.

Thinventory™’s enterprise platform serves a broad array of telecom companies, IT organizations, reprographics, medical firms, and other technology providers, wherein ByBox ties the client’s infrastructure with Thinventory™ to dispatch subsequent replacement equipments for inoperative machinery and appliances. “We integrate the customer’s enterprise platform with Thinventory™ and source the replacement part in the most cost-effective way possible to provide a fix to that machine,” adds Miller. On a workforce automation front, the platform facilitates disintermediation by eliminating manual labor, where field service employees are weighed down with the doorstep delivery of equipments. Adding another perspective is Thinventory™’s ability to collaborate with suppliers directly to collect products, process the warranty claim, and in turn dispatch the parts on Thinventory™ straight into the SmartBox for the engineers. “The need for a physical warehouse and an additional distribution layer for the supplier becomes almost redundant,” points Miller.

ByBox efficiently orchestrates the return journey of the equipment that has been collected from the end-customer through a comprehensive return management strategy. Thinventory™ captures the data that encapsulates the equipment at the time an engineer returns it and accordingly, reroutes the equipment dynamically to the repairer, saving time, and reducing inventory holding and distribution spend. En route to the repairer, subsequent analyses ensure that the broken part doesn’t travel in an unnecessary loop via the customer warehouse. Thinventory™’s unique selling point lies in the fact that it doesn’t hover around relocating the part unnecessarily, unless a clear path is established with the help of data mining. “Move the data, not the part,” extols Miller.

Thinventory™’s customization feature allows it to be configured on a par with the customer’s business requirement. “With a whole slew of fine tuned business rules, customers add their own slant to Thinventory™, by controlling the modularity of the product,” says Miller.

Shedding light on products beyond the proficiency that Thinventory™ offers, Miller talks about Stockonnect™. Essentially a smart locker system that is controlled by a smartphone app, ByBox has deployed the Stockonnect™ framework— encompassing numerous lockers—located within calculated distances of each other in and around the city. Spotted in prime locations including data centers, university campuses, hospitals, train stations, and also corporate offices, Stockonnect™ provides access to the replacement equipment, so as to fix the machine. Stockonnect™ users range from third party engineers to technical couriers and sometimes, even end consumers.

In the place of operating and maintaining a central control console for the lockers, ByBox’ native smartphone app works in its customer’s favor by diminishing the overall expenses. Miller hails Stockonnect™ and Thinventory™ to be, by far, the biggest contribution that ByBox has made to disrupt the field service sector. “It liberates the whole availability and reliability for parts,” he says.

With a prominent clientele that includes Hewlett Packard Enterprise, Konica Minolta and Siemens, ByBox is taking the vanguard position to gratify the field service engineering needs of modern day industries. Case in point is Fujitsu, the Japanese multinational information technology equipment and services company. With full-fledged supply chain operations in many countries around the world, Fujitsu wanted to streamline their entire field service process and automate it in an efficient manner. The task at hand was right up ByBox’ alley and Fujitsu’s field service infrastructure was integrated with the Thinventory™ platform, which translated into absolute supply chain visibility for the customer. Down the lane, Fujitsu witnessed a dramatic reduction in inventory holding that expedited the field service’s operations, owing to the removal of premium transport for moving inventory around to engineers.

“With a whole slew of fine tuned business rules, customers add their own slant to Thinventory™, by controlling the modularity of the product”

Surrounding the debate around finding the right ingredient to serve a lucrative clientele, ByBox insists on a three-pronged lane of benefits for its customers in the field service sector. “On behalf of the customer, we commit to permanently reducing their inventory holding, minimum their distribution spend, and optimize their field engineers’ time,” remarks Miller. The ByBox workforce that displays vibrancy, enthusiasm, and commitment, pulls this off with a unique hierarchy, which thrusts the baton of responsibility equally on the employees’ as well as the leadership’s hands. The same drive is galvanizing ByBox to spread its footprint on a global scale, instigating a constant curiosity to invent and innovate products and solutions that mitigate the impediments along a field technician’s journey, opening the door for superlative efficiency and automation. 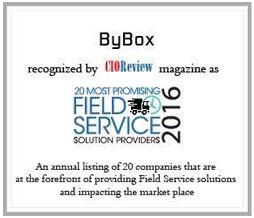