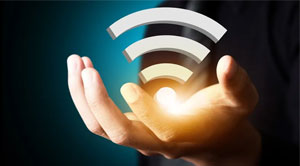 Wireless charging is typical in a phone and other devices lately, but still, this held back by short range. During this process, the devices usually place on top of the charging pad, which sometimes reduces the effect. Hence, it cancels out some benefits of going wireless. To start a new step in wireless charging, the MIT scientists have taken a step forward to develop an ultra-thin device to capture Wi-Fi signals and convert them into electricity.

This new system is entirely based on an existing device called rectennas (rectifying antennas). Usually, rectennas are accustomed to converting AC electromagnetic wave into DC electricity. But, most of them are rigid and made with silicon or gallium arsenide, which is best suited for powering only small electronics. So the team has begun their study to develop new rectenna, which is flexible enough to charge even large electronics.

Almost, all rectennas will rely on a component known as a rectifier. The scientist uses rectifier that converts current out of molybdenum disulfide (MoS2), which is made from 2-D semiconductor. While developing this rectifier, the team leverages singular behavior of MoS2, means when the rectifier exposed to a certain chemical, the atoms will rearrange in a way that acts as a switch, forcing phase transition from semiconductor to the metallic material. The structure is termed as Schottky diode. When the AC signal passes through this device, it gets converted into DC voltage, which can be used as power to charge electronic devices. The team mentions that this MoS2 rectifier is used to convert up to 10GHz of wireless signals with 30 percent efficiency.

The team states that it does not build up against other rectifiers, which can reach an efficiency of up to 60 percent. This is also generating a relatively small amount of electricity, producing about 40 microwatts from about 150 microwatts of Wi-Fi power. Despite, this is not much; it is enough to power medical electronic devices or small wearable. Hence it can reduce the needs of batteries in the future.