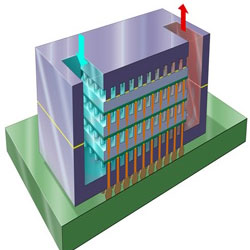 GREENBELT, MD: 3D stacked circuit technology – the future design of integrated circuit gains attention as it gives away more features and computing power, promising to occupy smaller space on future electronics. But, the ultimate challenge of such a design lies in removing heat from the tiny-spaced circuits, especially when dealing with aerospace concerns.

In this design, data is carried both horizontally and vertically linking all the chips with higher bandwidth, computational speed and performance, while consuming relatively less power.

Franklin Robinson, NASA engineer, Goddard Space Flight Center reports in Space Daily site that taking out heat from high-power electronics has the risk of making the whole set-up inefficient. Along with his team, Robinson has stepped into experimenting all possible cooling techniques and their effects on the system; a step towards doing their bit for NASA.

The team under the guidance of Robinson is striving to make the technology flawless for use in NASA. In one of their attempts they found out that passing a coolant through human hair-sized embedded channels within or between the chips, the heat can be taken off. This is in contrast to the idea applicable on 2D circuits, which involves a ‘floor plan’ to combat the heat.

As a finer-touch to this idea, the team is now investigating on ‘flow boiling’ – the coolant boils as it flows through the circuit taking away the heat. The choice of coolant used should be based on its latent heat of vaporization property. This helps in resolving the issue of device failure due to overheating. Another added benefit is that the fluid flow is least affected by the lack of gravity which makes it adaptable in any environment.

Robinson further evaluates the ‘two-phase flows’ in miniature channels to study specifications like channel dimensions, flow parameters and fluid properties that produce gravity insensitivity. This is because changes in gravity can affect the performance in many systems, therefore getting to the bottom of these conditions reduces the risk of aerospace-based applications.