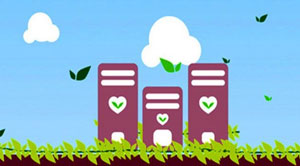 With increasing demands for data storage, the global green data center market is expected to witness rapid growth during the forecast period. Today, most of the mega data centers are being facilitated and powered by renewable resources such as wind energy and solar panels. Meanwhile, Google plans to power all its data center operations using renewable sources of energy by the end of 2017. Analogously, Microsoft had also made a huge investment for more than 500 MW of renewable power in the data centers based in US, last year. Besides storage, the driving reasons to accept a greener way is the coupling of data centers with the pressure of government regulatory bodies on power consumption levels.

Corporates and cloud data centers have been recognized as a heavy consumer of power. For some of the industries including in power sectors, serving the planet may not always rank as high as serving the customers. Still, environmental sustainability is rather an issue gaining serious and significant attention from both business owners and the customers.

Another crucial factor in the row is the cost optimizations in various components that include storage, server, switches, and power generating equipment. Creating a thrust toward green data centers that are powered by renewable sources of energy, more advanced designs and strategies are being implemented in data centers to enhance its operational performance. This has caught the attention of researchers and other experts to test and explore further and pushed CIOs to look out and invest in top-notch cost-saving solutions that fit their requirement.

The use of energy-efficient infrastructure, renewable energy sources, and waste recycling are some of the methods implemented in green data centers. One may find building a green data center to be expensive initially but, in the long run, it can add on to organization’s petty cash by cutting costs on multiple operations and maintenance services. Typically, it can take two to three years, sometimes longer, for a midsize or larger green data center to realize ROI on their energy efficiency investments.

Moreover, some of the fringe benefits of working with such green data centers are:

Note: All of these factors can significantly add to a company’s competitive advantage.

Trends indicate that the proliferation of IoT devices and nex-gen technologies will be creating even more data in next 5-10 years. On a par with high demand for storage, fuel cells as a tool to overhaul the traditional power architecture of mission-critical facilities are making strong waves in the market.

Fuel cells are an attractive alternative energy source for data centers because of multiple reasons: reduction in fuel and energy cost; low carbon emissions; increased energy efficiency & reliability, significant tax reduction for corporate data centers, and many others. For example, solid oxide fuel cell technology can be used that converts fuel into electricity, without any combustion.

Placing fuel cells in a prominent position in the power chain, Microsoft Corporation is developing mini fuel cells for each IT server racks. It will reduce the need for power electronics from central systems that results in high energy consumption. However, low capital organizations are less inclined to employ fuel cell primarily due to increasing reliance over fuel as a source of power.