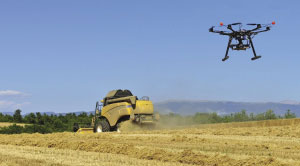 The demand for food is ever-growing, and farmers across the world are bridging this gap with agricultural robots.

FREEMONT, CA: Agriculture is increasingly becoming a high-tech industry, drawing innovations. The technology used in agriculture is developing rapidly by advancing the production capabilities for farmers with evolving robotics and automation technology. Agricultural robots or AgBots are increasing production yields for farmers in various ways. From drones to autonomous tractors to robotic arms, the technology is being deployed via innovative applications.

Freeing human labor with the help of automation is the new trend across multiple industries, and agriculture is no exception. Most aspects of farming are exceptionally labor-intensive, which is an ideal niche for robotics and automation. AgBots are beginning to appear on farms and performing activities, including planting, watering, harvesting, sorting, and many more. Ultimately this new wave of smart equipment is making it possible for the industry to produce higher quality food with less human efforts.

The benefit of robots is that they do not get sick or tired, and they make fewer errors. At higher speeds, the more top quality products can be sensed by the machines accurately. As the robots can be made lighter and cheaper, it can be used in various fields in agriculture. They can quickly work around the trees, the rocks, the ponds, and the other obstacles.

The idea of employing robotics in agriculture is new, but the opportunities for robot-enhanced productivity are immense. They appear on the farms in various forms and increasing numbers. Shortly, one can expect the robots performing the agricultural operations such as spraying and the mechanical weed control, the fruit picking autonomously, allowing the farmers to lessen the environmental impact, and enhance the precision and efficiency.

The robots can protect human workers from the harmful effects of handling the chemicals through the system of high spraying, and they can reduce the use of pesticides. The fruit picking robots, the driver-less tractor, the sprayer, and the sheep shearing robots are all designed to ease human labor.

Conventional farming methods struggle to keep up with the efficiencies required in the current market. But the rise of robot-assisted farming can attempt to solve the pressing challenges faced by the agricultural industry.