Amazon Drones Can Now Feel the Air as FAA Relents 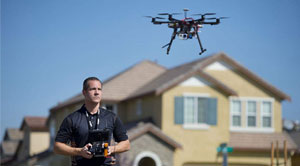 FREMONT, CA: Amazon finally gets the nod from Federal Aviation Administration (FAA) to test its drone delivery service in the U.S. Amazon through its Prime Air service had announced that customers can receive their delivery – for the purchases made on Amazon – in less than 60 minutes. Since then, FAA for Amazon has been a hard nut to crack, but seems like the day has arrived. After months of debates over bringing the drones from the labs into the real airspace, FAA finally heeds and gives Amazon a green signal to carry out tests.

Drone Everywhere
Drones have particularly gained interests not just among the businesses but the general public; the unmanned aerial vehicle was also in news during the Christmas last year as more people wanted to gift them. Also, drones went flying so much that they drew the ire of air carriers who complained of too much obstruction in the airspace and expressed serious safety concerns for their business and customers in the wake of increasing drones in the airspace. FAA had to chip in and announce a host of safety measures for those are operating drones in the U.S. airspace.

The height to which the flights can operate should not exceed 400 feet; tests should be conducted in daylight hours in visual meteorological conditions; drones should remain within visual line-of-sight of the pilot and the observer; pilot controlling the drone should atleast have a private pilot’s certificate and current medical certification.

That’s not all. The retail giant and cloud services company would also be required to submit monthly data to the FAA. This data comprises of the test details including: the number of flights conducted; pilot duty time per flight; unusual hardware and software malfunctions; anomalies pertaining to the air traffic controllers’ instructions; accidental loss of communication links.

PTP: Unlocking the Potential of Cloud for Life Sciences Companies

PTP: Unlocking the Potential of Cloud for Life Sciences Companies

Everest DX: Changing the Center of Gravity to Autonomous Platforms

Ensono: The Gateway to Digital Transformation

Auxis: Maximizing the Value of Cloud for Organizations

Peniel Solutions, LLC (PSL): Leading the Public Sector on the Path of Transformation

ENSONO: Enter the Year of the Cloud

STORAGE MADE EASY: A Single Control Point to Corporate Data

Cloudnexa: Making AWS Easy for SMB’s Around the Globe

LABUSA: Safeguarding Information and Cloud Security with Organized IT Practices

ExoNetworx: Creating the Power of Simplicity on AWS

VisualOps: What You See is What You Get