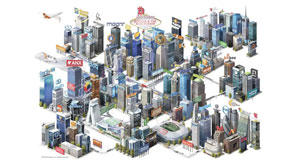 Bringing a wave of digital disruption, the devil’s advocate for the fintech space–Bitcoin, has introduced a radical new option to transact value. This cryptocurrency is solely minted and exchanged on internet using free software products that run simultaneously on computers of users–known as nodes–around the world. A purely peer-to-peer version of electronic cash liberated from any third-party hitch, Bitcoin can be spent or transferred by account holders, hidden behind a cryptographic pseudonym. Account holders are completely incapable of spending a coin twice or introducing a counterfeit coin, as such activities will be detected and rejected. Behind this innovation lies a cryptographic technology–‘Blockchain’, which, in other words is the key to unheard reliability and security of Bitcoin’s transaction system. It creates a distributed ledger, which is public, and registers every authorized transaction on the network, i.e. the movement of Bitcoins in and out of the account holder’s wallets.

Building a Bulwark around Fintech

The accreditation for elimination of third parties goes to Blockchain. It facilitates a way for strangers and people who mistrust each other to form an open record of their holdings apropos that everyone in the Blockchain has to agree to these terms. Data can be written any time in the Blockchain but not any can be changed or erased. This set in stone feature brings about a unique, permanent and ever-growing transactional history, a history that can forge firm transparency and accountability. Blockchain makes it impossible for account holders from reneging on transactions. Once registered in the ledger, there is no looking back–the transaction is irrefutable.

A key component that provides the required automation and backstage computational capabilities to Blockchain is the ‘smart contract’–a piece of code that is stored, verified and executed on a Blockchain. The smart contract is a program that works on the basics of predictable behavior. It controls the assets on the Blockchain; from cryptocurrency to media rights or property auctions. This contract fills the void of a trusted third party, as it performs the tasks which it is programmed to carry out. Since the Blockchain is transparent, anyone with required expertise can verify the code in the smart contract and check if it implements a fair and valid transaction. Blockchain and smart contract technology will continue to mature and embark on providing significant transparency improvements to fintech by streamlining inefficiencies in transaction settlements and reducing operational risks. The deep-seated nature of Blockchain makes it a very powerful instrument, allowing it to support applications beyond Bitcoin, which are already starting to zoom.

Latterly, Bank of England and Bank of Canada expressed interest in Blockchain technology as they recognized the advancements bestowed by fintech which seems bright for central banking, as reported by Goldman Sachs. The report touted regarding the technology’s great cost cutting potential and reckoned the billions of dollars that could be saved through greater transparency, reliability, accuracy, and security. The company along with eight other investment banks plumped for the tech start-up–R3 CEV last year. Another distributed ledger upshot is the success case of M-PESA in Kenya. M-PESA’s service allows megs of Kenyans to use a cell phone to transfer cash to another person. Until March 2015, the mobile money transfer service had more than 20 million users in Kenya with an additional 7 million users in Tanzania.

Blockchain is certainly a revolutionary technology but like the whole lot, it has its downsides. Blockchain attracts a lot of untrusted participants and darknet entities. Due to lack of a kosher infrastructure, it is susceptible to breaches and hacks. Bitcoin, itself has received a devoted following among predominately well heeled, often anti-government and the writ large–notorious criminal geeks.

Lately, there has been a chain of notorious evens where computers or disk drives harboring Bitcoin wallets have been have been mislaid, along with assets worth millions of dollars that they controlled. Moreover, it has been countered that multitude pieces of malicious software have been developed explicitly to whip Bitcoin private keys and balances. The DAO–Decentralized Autonomous Organization is a radical experiment in crowd sourced investing; it raised over a $150 million in ether–a cryptocurrency that’s starting to touch Bitcoin. The funds were stashed at an address on the Ethereum Blockchain (the protocol supporting ether) which would be used until members of DAO would collectively decide on how they wanted to spend these funds. In the month of June, considerable portions of ether began getting transferred away from the DAO’s address. In a significant amount of time, DAO’s balance dropped by 3.7 million ether, worth $79.6 million at that point of time. Once the hack was revealed, as first reported by Business Insider, the price of ether plunged by 27 percent. Events like this bring the cryptocurrency market and its entities to a panic.

Even though decentralized approach neatly has some advantages from a transparency point of view, it clearly does not kibosh the possibility of cyber attacks or data being altered. The ingredients of Blockchain have circled around for several years, however, the application of those ingredients and building application layers on top of the Blockchain technology is still vernal and vulnerable yet viable.

As researchers and developers strive to overcome the technical challenges of Blockchain innovations, the future of financial technology could be a very different place. It’s too soon to predict the fortune of Blockchain and Bitcoin, but there is a likelihood that, what the Internet did to communications, Blockchain could do to finance.