AR, VR, and MR to Rule the Market 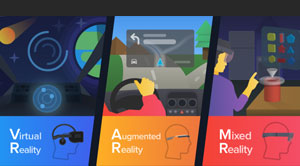 As augment reality (AR), mixed reality (MR), and virtual reality (VR) gains traction in becoming the technology that is making the most noise in the economy, engineers are looking into new ways and rooms for improvement and making the experience more natural for the user. The primary motive is to help improve gesture recognition technology and develop a gaze direction tracking system that would enable the user to connect to the virtual reality with a far natural approach. If this is made possible, commercialization of the technology will help retailers improve their brand experience as end-consumers can go to a physical store, use an AR/VR device and look at any object to now the price and general description about it. Retail stores will be able to cut-down cost of hiring salesperson and will improve the efficiency of the whole store considerably. In near future, gesture-triggered animation of virtual objects can also become a big advantage for retailers.

Mostly AR and VR technology is leveraged by the entertainment and gaming industry but its extension to other verticals not only have a high-profit margin but also pose a great prospect for VR/AR vendors. AR-based digital transformation is set to drive retail as well as the manufacturing industry soon as executives of large plants no longer need to send engineers on the field to fix machines. Engineers can now leverage IoT devices to point out the problem areas and fix the situations from a remote base by projecting the sensor feedbacks on an AR module.

In this mobile-first economy, the demand for AR and VR technology on mobile devices is fast gaining traction within the market and attracting masses of end-users. With Apple recently unveiling the ARKit 2.0 platform for iOS 12, the bars for the competition is set much higher, as the platform allows developers to create a shared experience scenario on the basis of specific location, object detection, and image tracking. Apple’s AR platform is not only making the AR apps much more dynamic but is also heightening customer experience. Apple has also launched two more apps—Measure, an AR supported app that measures the size of objects in real-time. The other one being QuickLook and USDZ, an open file format AR supported app, which enables the users to share contents in Messages, Safari, and mail while retaining the high-quality graphics and animations. Companies like GeoGebra have leveraged the platform to create an AR powered mathematics tutorial solution for children.

Google’s ARCore launched in early March of this year is also approaching the AR/VR market space with a head-on approach with four development environment options—Java, iOS, Unity, and Unreal. ARCore uses motion tracking, light estimation, and environment perception of the area through the mobile camera to create a virtual environment.

Microsoft’s Windows Mixed Reality platform is another contender that is gaining strides in the market with a 360-degree view and creative, live-social events. Microsoft’s smart glasses HoloLens is developed to provide an advantageous AR powered VR gaming experience with a measurement unit, six sensors, and a camera.

Facebook’s AR studio application provides design interactive filters and effects that leverages augment reality to respond to the surrounding environment. The feature-rich app uses the mobile camera to create interactive contents and is only available for Mac computers at present. But, the positive response to the application in the market can be seen as a huge success for the company and might make it the AR/VR leader in future.

Sony has perhaps gained the most end-customer attraction after unveiling the PlayStation VR headset that heightens the gaming experience considerably.  Following this, Snapchat also deserves a worthy mention, as their recent launch Lens Studio AR developer tool, which can be used by retailers, news agency, and absolutely anybody. The tool can be leveraged to create a world lens that enables the users to place interactive and 3D objects on a picture or a video. AR, MR, and VR technology is perhaps becoming the most popular and easily adopted technology for both the manufacturers and the end-consumers.