Are Robots Going to be Working for the Government Soon? 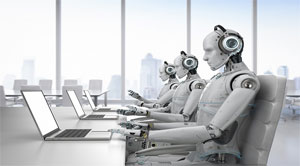 The government seems to be seeking to promote higher-level activities for robot employees. Is the robot scenario close to replacing people?

FREMONT, CA: Many well-known scientists like Elon Musk and late Stephen Hawking said that ultimately artificial intelligence and robotic bodies would result at the end of the planet or the end of human existence. It's still a theory, though. It's hard to say that robots can destroy human civilization.

Although there is a possibility in the short term that artificial Intelligence and robotics that advance to a point where robots are going to take the place of humans and people are going to be out of work. Half of all fields of work, according to analysts, already include vulnerable workers who can be replaced by AI or robotics by 2026 at any moment. Some findings also indicate that there will be more new robotic workers more harshly affect traditionally female-dominated fields.

Nevertheless, the government is following a careful approach designed to use robotics and automation to raise people, rather than removing them entirely.

Twenty federal agencies have currently employed one of their staff's lowest levels of robotics, known as robotic process automation or RPA. The bulk of expenditures were made by the Administration of General Services, which plans to increase 10 RPA systems to 25 by the end of the year. Such RPA programs, however, are not entirely true or robotically advanced AIs or advanced in terms of robotics. Old-school expert systems are more similar, but repetitive work can still be performed reliably and at high speed.

The government's goal right now is to promote higher tasks for its robot workers. It needs to develop intelligent process automation or IPA for that reason. An IPA system's roles are much more analogous to those of non-intelligent RPAs. There is an exception, however, that IPAs will derive information from their context, call a certain level of judgment if something falls beyond their programmed parameters, and remember those decisions if they are right.

The aim of the new advanced robots of government will not be to replace people. In some cases, however, this will happen, but instead, to raise them out of the jobs where they have no future.

The government was ordered to do just that as per President's Management Agenda, which specifies that government employees should be promoted to higher-value duties wherever possible from menial positions. Using either RPA or the IPA method can do this by conducting and completing important, low-value tasks that humans would abandon. It's just that the IPA structures will stretch a little bit more the concept of a menial work towards the high end, encouraging or displacing more people based on how you want to look at it.

It's good that the government is noticing the human impact of AI and robotics, particularly the enhanced efficiencies that IPA systems can offer. It will be good if the government takes a balanced approach and promotes workers who have demonstrated their reliability and skills by doing drudge work in a similar field to higher-level tasks. The departments will also boost procedures, including more in the long term.

If everything goes according to the plan, people, at least in the government sector, will not complain about the machine replacing them and take their jobs. Instead, they might be boasting about a robot taking responsibility for their old, crappy job, paving the way for their promotion.