ARTIFICIAL INTELLIGENCE: WHY SHOULD CIOS CARE? 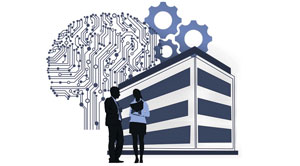 Ruth Aylett, professor of Intelligent Virtual Environments at the University of Salford, and one of the known names in Artificial Intelligence (AI) field recently published her book ‘Robots: Bringing Machines to Life’. In her book, she discusses the possibility of producing the perfect blueprint for the ideal "living" robot. Many other chief personalities of the technology field including Aylett have been fascinated with what AI beholds. Stephen Hawkins believes that success in creating AI would be the biggest event in human history, but unfortunately, it might also be the last as short-term impact of AI depends on who controls it, the long-term impact depends on whether it can be controlled at all. Pete Wurman, CTO, Kiva Systems believes that AI can be used to run mobile robotic systems in warehouses and distribution facilities.

The question here arises that why is there so much babble about AI suddenly? For a technology which the industry didn’t even consider a decade ago, what has caused it to suddenly grab all eyeballs?

Artificial Intelligence, once just a staple of science fiction, has indeed transformed into a practical reality. Driverless cars, robots, machine learning and more, all are spokes in the Artificial Intelligence wheel poised to transform business across a wide variety of sectors. Recent landmarks such as IBM Watson, Siri, Google Now, and Cortana are merely symptoms of an IT arms race built on an increasingly mature theoretical foundation. The era of machines is indeed inevitable, but what do they really mean for CIOs today and why should they care?

Check This Out:-  Top Artificial Intelligence Solution Companies in UK

Though Stuart Russell, an AI professor at UC Berkeley asserts that it will need half-a-dozen technological breakthroughs comparable to development of nuclear weapons to make machines achieve brilliance but applications of AI are limitless and so are its promises. Be it automated translations, automated assistance, simulated trading, intelligent robots or untiring, lightning-fast computer checking medical images, all are surely helpful and CIOs can bring these applications of AI into their enterprises in the future. As Dave Coplin, Chief Envisioning Officer, Microsoft points out, “AI will change how we relate to technology. This technology will help us augment our processes and methodology, and support us to extend our capability.”

But technology takes away while it gives. Just as the weaving machines made weavers lose their jobs so will AI technology. Though it will help others by enhancing their mental skills, but the number of jobs that AI eats up will be huge.

After a half-decade of quiet breakthroughs in artificial intelligence, 2015 was a landmark year in AI field. The pace of advancement in AI actually speeded up. This unprecedented advancement was mainly attributed to the fact that cloud computing infrastructure became vastly more powerful and affordable, with the ability to process complex information. Plentiful datasets and free or inexpensive software development tools were also available for researchers to work with. This caused a crucial class of learning technology, known as neural networks, to go from being prohibitively expensive to relatively cheap and thus contributed to the rise in AI technology.

Artificial Intelligence’s reality today is very different from its future vision. For example, manufacturing industries where complex products are made, or where product designs change very rapidly, cannot benefit from AI as makers of complex products such as airplanes or constantly changing products such as smart-phones are limited in how they can use this technology. As Daniela Rus, director of the Computer Science and Artificial Intelligence Laboratory, MIT clearly states "Every automation line requires special tooling, special configuration. This takes many years to create. If your product is going to change every three months, there's not going to be enough time to reconfigure tooling and factory plans." Though Rus believes that in the future, automation could be available on demand via voice commands but she also asserts that there is a long way to go to achieve that.

What does AI mean to a CIO today?

At present, it means nothing! But that doesn’t mean that this technology won’t have a hold on the industry in the times to come. Professor Mary Cummings, director of the Humans and Autonomy Lab affirms that robots and automation solutions in general, excel right now in handling tasks that rely on well-rehearsed skill execution and rule-following. For any tasks that require judgment and expertise based on human knowledge and the ability to consider what-if scenarios, automation falls short.

What the Future Beholds!

Though it is still in the development phase, AI is ‘the’ digital technology that would drive the next phase of technological revolution. The rate at which AI is advancing, in the coming decades CIOs will have to fill the gap that may emerge between rapidly transforming technology and the slower adoption pace. Jennifer Banner, CEO, Shaad Companies, suggests CIOs to build a team to handle this futuristic transformation in strategy and legacy business systems. “CIO will need to educate the CEO and board about the transforming technology," explains Banner. "CIOs need not come down with a thousand pages of PowerPoint decks and heat maps," suggests Banner,” They will be needed to come into the board room, put their fist down and say, 'There is a war going on."

Need of the Hour: What can CIOs Do?

A Deloitte study titled Cognitive technologies: The real opportunities for business published earlier this year concluded that within the next three to five years, we expect there will be an exponential increase in the number of commercial AI-based applications. This connotes CIOs in all industries need to be thinking about whether, how, and where they should be investing in AI-based technologies. They need to outline principles to make better decision about this cognitive technology.

CIOs need to understand that how can they embed AI into their process and product. They also need to create insights in order to use AI in their solution portfolio.

An evaluation in their business case has to be made by the CIOs to make investments in AI. The Value, viability, and vitality that AI offers to their solution must be first assessed by the CIOs before taking an investment decision.

In order to identify roles in the organization which requires skills associated with AI to be acquired, CIOs need to review their human resource and set up a training pedagogy.

Though AI will eat up jobs, require a significant investment of human time to train or configure before they can do their work. CIOs thus need to employ a workforce that has the skill set to enable interfaces for AI.

CIOs must also note that major tech behemoths have made their AI platform available for developers to build their apps based on AI. CIOs can take advantage of this scenario and employ developers to leverage these AI platforms.