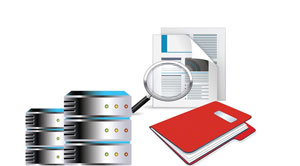 Four years since its break-off—scientists at CERN have been studying about Higgs Boson particle; large Hadron Collider is repeatedly firing particles on one another at unbelievable speeds. Surprisingly, even after discarding 99 percent of the data generated by the collider, researchers are left with one percent of the total data i.e. 22 petabytes. However, CERN can afford as many as 150 datacenters around the globe to store and process such cosmic amounts of information.

While it is highly improbable to generate or produce anything as much as Hadron Collider does, there is an unprecedented amount of data around us to wade through and process. By and large, deploying a governance system for data and document management across various organizations could potentially address the distinct motives, facets our researchers face. Still, many organizations continue to sweat out in practice to automate the process of storing and managing their corporate documents even after the existence of numerous document management technologies.

Incorporating such system may also take as long as a year—all to ensure its accessibility, accuracy, completeness and reliability of structured and unstructured data. “Perhaps the biggest mistake organizations make in implementing an overall document management strategy is getting started without setting clear objectives for the program,” said Scott Byers, CEO of Diversified Information Technologies, a provider of document management outsourcing services.

“Whether the desired outcome is regulatory compliance, reduced cycle time, decreased costs or shared information access, companies should first understand the business drivers for document management,” Byers said. “Doing so can help ensure that they put the right document capture and management procedures in place to achieve their primary goals,” he added.

In subsequent authoritative considerations—prior to imaging—companies often neglect or miss out on the motive to establish clear-cut document capture and retention policies as part of the document management process. Due to ignorance or cognitive content, no attempt is made to narrow down what is being scanned, and they finish up scanning documents that shouldn’t been scanned.

“A longstanding chestnut that many companies still do not follow is, don’t scan everything—be selective,” said a consultant who focuses on document management and collaboration technologies. “At least half of all corporate documents are garbage,” he estimated. “People don’t want to take the time to separate the wheat from the chaff. Once electronic documents are created, it goes through the document capture process, which most likely will never be disposed off.”

Ultimately, it turns out that not being selective about what goes into a document management system can cost big. If one fails to integrate retention and disposal policy into the document capture crusade, it can account to an explanation to why a company’s business is frequently operating at a loss.

In order to avoid those errors, Forrester Research Inc. analyst Alan Weintraub said, failing to index documents deliberately as they’re being captured is the another bloomer by many. Indexing (done manually or automatically) is a process, an organization is obliged to consider before stacking documents in a system or put it into document management workflow. The resulting metadata enables the on-demand accessibility for quick search and retrieval across any number of hard drives and servers.

‘Capture’ is where the big data journey leads off! Directly or indirectly, organizational decisions are reckoned by information that we had scanned and stored earlier with/without indexing. Moreover, those documents can be changed or deleted without a way to track previously modified status. Such scenarios are not trustworthy of Document Management System (DMS), and in short to the users.

Another potential pitfall is a lack of patience when implementing sophisticated document capture technologies—tools with embedded artificial intelligence capabilities, for example. The companies which have had invested and implemented in advanced document capture software, meant to simply “flip the switch” and go live, according to Alan Pelz-Sharpe, a Principal Analyst, and Director at Olney, Md.-based consulting firm Real Story Group. This obviously takes down the confidence of the users, he added.

Recalling one of the instances, Pelz-Sharpe shares one of the client’s experience, who had deployed new document capture tools. The tool was in use for processing patent-application documents, which took six to nine months for the system to adapt and become highly accurate. Adding to that, even relatively simple capture processes will claim a few days for the tools to acclimate themselves with the system, he explains. As a result, the idea to continue existing document capture software running in parallel with new tools until organization is sure that the latter is working properly is much recommended. Faster, more precise and more secure the information flow is, the better is document management strategy of an organization.

The definition for the biggest threat to one’s business has probably deepened from the get-go of 2016. It can be anyone who wants to take advantage of the corporate information, not necessarily any existing rival in the market. Back in March 2015, the U.S. health insurance company ‘Anthem’ admitted the attack on its database. Even, Juniper Networks had discovered an implanted “backdoor” in the operating system of their routers/firewalls, in Dec, last year. Thus, “unauthorized code” could have permitted an attacker to decrypt (and thus snoop on) communications. Such vulnerabilities mandate organizations to push aside the risk of capturing, indexing and securing data, documents on a DMS one can wage upon.

Access Innovations, Inc.: Unleashing the Full Potential of a Knowledge Base

Corise To Help Overcome The Data And Technical Skills Gap

Advanced Aviation Trends to Watch For in 2022 and Beyond