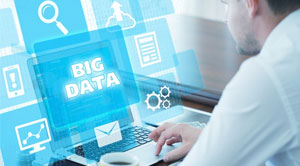 Blockchain is easily emerging as one of the more crucial developments in the IT sector over the past few years. It is said to have the potential to take over big data and improve it abundantly; essentially, change the way the world approached big data to begin with. This improvement primarily consists of data quality and resolving around security issues. Even though often mistaken for Bitcoin and Litecoin in the past, it has managed to sink into consumers as differing from the crypto-currencies. Blockchain is currently versatile in nature to deal with any kind of data that needs to be digitized.

Data integrity is now considered a distant luxury in the data lake that pools in data from every direction, but block chain works on this issue by introducing a data layer that generates a whole new list of possibilities for AI capabilities. With the use of blockchain, data storage clashes with the amount of data that is available. Cost savings can be procured from using decentralized storage providers from the data storage point of view. This in effect, imparts a certain downward pricing pressure on SaaS suppliers in general, as they continue to move towards utilizing decentralized storage providers.

But the most prominent advantage blockchain wishes to bring about is security. In 2015, various insurers have lost more than 100 million patient records to hackers in the United States alone. Blockchain prevents the chance for a risk of identity theft, as even doctors who access patient records need multiple authorized signatures from other parts of the network before doing so.