Bringing in a New Era of Grid Computing 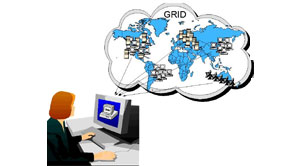 To cope with the increasing complexity of software systems, they are separated into a number of independent components. One of the main challenges in software engineering is the coordination of these components and services. Grid computing—one of the vital application fields of coordination—is widely used in computational science. The other important field is workflow management which is used for business applications. Bridging the gap between grid computing and workflow management opens the gates to further development in both fields

In the last 10 years, massive amount of knowledge has been gathered in process modeling, examination and performance. Petri nets has laid a theoretical foundation, which enables the analysis of a large number of process models—from Business Process Execution Language (BPEL) to SAP reference model (workflow specifications). Analysis of process based on system logs has gained more focus in the recent years. A flexible toolset for process mining is provided by the ProM framework, being predominantly functional in a Grid ecosystem.

Until recent times, infrastructure has been the prime area of focus for the Grid Computing community. In addition to most workflow applications placing the accuracy characteristics in the power of the user, grid software design enables users to put forward their predicaments to the Grid, which requires lesser work on the process of modeling it.

As a result, certain expertise has been applied in Petri-net modeling and analysis, workflow patterns, process mining and concrete workflow technology to Grids. Doing that would require investing in the fields including: