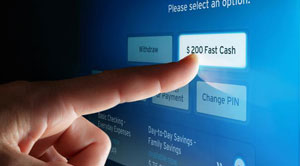 New York and Canton, OH: Eyelock LLC, a market leader of Iris-based identity authentication solution and Diebold, Inc—a leading global provider of self service technology, have teamed up on a new screen-less, self service ATM concept. The concept harnesses emerging technology to create a vision of the future banking experience.

The Diebold prototype, called Irving is being tested by Citibank, at its innovation lab in New York. The prototype will also be on display in the VOXX International booth #10417 at the 2016 Consumer Electronic Show, Las Vegas. The design of the new concept ATM looks different and is an ATM without a PIN pad, card reader, or screen. Instead, all transactions take place via a mobile app on the user’s smartphone.

Apart from near field communication (NFC) and quick response (QR) code technology; the new system uses iris scanning from EyeLock to identify the customers at the ATM. “EyeLock believes that the age of carrying plastic cards and remembering passwords is just about over and the era of unfettered personal access through biometric technology is just beginning,” said Anthony Antolino, Chief Marketing and Business Development Officer, EyeLock. “For banking and other applications, EyeLock’s iris identity authentication solutions are not highly secure, but very easy to use.”

“The process is simple—a customer signs into their banking app on their phone or tablet and determines how much money they want to take out. Once the withdrawal is input, the customer can go to any EyeLock-equipped ATM on the network to complete the transaction”. Frank Natoli, Executive VP of Self-Service Technology explains “while digital channels are evolving, cash will continue to play an important role in consumer transactions. “That’s where Diebold comes into play to bridge the digital and physical worlds of cash in unprecedented ways through cardless transactions, mobile integration and more convenient access.”