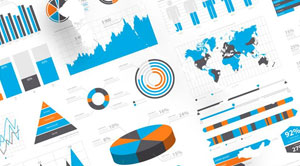 The big data space is still filled with challenges and experts are trying to fix the issues with advanced augmented reality (AR) and virtual reality (VR) data visualization. According to industry veterans, technological advancements in the big data space will empower enterprises as well as small and medium businesses to leverage the spatial intelligence in identify patterns and create connections that will be helpful in detangling the clutter of big data which had been out of reach since before traditional 2D analytics had come into being.

One of the significant crypto investment companies, Atomic Fund, had attempted to look into the datasets of a Bitcoin market crash that occurred on February 5, 2018. The organization performed queries on the data, which was followed by the upload of a 10-minute slice on a renowned immersive data visualization platform named 3Data. The objective was to create an interactive microcosm consisting of wallet transaction data.

Piero Gancia, the head of operations at Atomic Fund stated that they are looking for ways in which they can understand all the data available in the transactions. Along with this, the expert also hopes to unlock fresh insights by interpreting the relevant data with a different outlook.

The senior data engineer for 3Data, William Murphy, explains how they labeled every unique wallet identifier as nodes, which helped them find possible combinations of wallet pairs that had participated in Bitcoin transfers between themselves. This has, as confessed by Murphy has made headways for an added advantage which can be utilized by their organization. The company aims to generate hypotheses in regards to transaction patterns that would work as indicators of future transactions.

STATinMED: Unraveling the Potential of Data in the Pharmaceutical Space

Stratifyd: The Next Generation of AI Powered Analytics