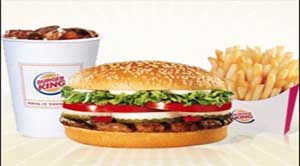 The mobile app targets young consumers, for whom smartphones are an inevitable device. “The real beauty of this is to be able to understand the consumer behavior of our guests,” said Alex Macedo, President, North America, Burger King. Burger King is also keeping pace with McDonald, which is testing its mobile app in 1000 stores. Both the companies are aiming to retain consumers lured by rivals such as Sonic, and Chipotle Mexican Grill.

Another competitor in the space, Starbucks, already has an enormous number of audience through its mobile app, but the jury is still out on how quick service chains can transfer brand awareness to app store downloads, says one analyst. At this point Burger King must concentrate in building an engaging app, to generate the customer data level and business, to make the app a success.

Next month onward, people can use the Burger King app to place orders, redeem coupons and also pay online. The pay option generates a four-digit code, which the cashier enters into the point-of-sale system. The system deducts the purchase from the guest’s account, and logs the transaction.

The Burger King app, which has been built up by Tillster, a software company, will use the purchase data to deliver customer coupons, based on their preferences through emails, text messages and digital badges, which will provoke customers to open the app. Through this Burger King will create a loyalty feature, which will reward the regular customers with free food. The app also has a feature of customer preferences. It’s going to allow us to make better offers,” Mr. Macedo said.

“To gain popularity in the Android and iPhone app market, Burger King needs to build awareness, as well as provide enough incentives to download the app,” said Suchitra Mulpuru, Analyst, Forrester.  With over two million apps vying for consumers’ attention in Apple and Google’s stores, she said even big brands have struggled to gain traction.

Burger King will start marketing the application shortly after roll out. Burger King will try to avoid the complications associated with major software launches by limiting availability of the app’s features across its stores, said Samuel Heath, Director, revenue management,  Burger King. Ideally, this will make fixing any bugs more manageable, although it may upset some customers when they discover the app is not fully functional. “Taking a measured approach will help us avoid some of those pitfalls that you get in large technology deployments,” Heath said.