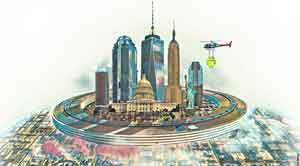 New York City has turned out to be a refuge for tech workers who never want to be bounded only by those working in the same industry. Some workers want to reside in New York City because it is a lot more exciting and amusing place to dwell.

FREMONT, CA: Facebook was once in search of another New York office, which could accommodate its 6,000 workers, more than double the number it employs currently in the city. After it was settled on Hudson Yards, the huge mini-city taking shape on Far West Side of Manhattan, the existing tenants were asked to move, and a small group of construction workers started to restore the buildings for the company.

The push to have a room for the growing operations of Facebook is part of a rush by the West Coast technology giants to spread out in New York City. The never-ending growth is turning a broad area of Manhattan into one of the most vibrant tech corridors in the world.

Apple, Amazon, Facebook, and Google have their big offices along the Hudson River, stretching from Midtown to Lower Manhattan, but are still hunting for new ones in recent months to compete with one another for the same space. It is being speculated that the companies are expected to have nearly 20,000 workers in New York in the next two years.

Various cities around the globe and across the US, have competed for long to establish themselves as worthy contenders to Silicon Valley. New York City, which was nowhere close to overtaking the Bay Area as tech leaders of the nation, is now increasingly challenging the tech companies and talent.

The growth of New York, as a tech hub, has come into the picture because of the industries that have long dominated the economic landscape of the city, modified by technology. The development in New York is taking place majorly in the absence of significant economic incentives from the city and state governments. Although at a slower pace, it is continuously carrying out the addition of jobs in the city. The announcement of Amazon recently concerning the lease of space in Midtown for 1,500 workers began a discussion over the use of incentives to woo large tech companies to New York or not.

Technology firms are opting for New York, which has a critical market, similar to Europe, to tap into its extensive and skilled talent pool and to draw more employees who are inclined toward the city’s diverse economy over tech-dominated hubs on the West Coast. It is considered that if a company survived a long period in the broader tech sector, it was inertia that brought it to Silicon Valley.