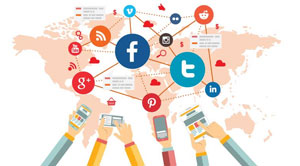 The last decade has witnessed a humongous growth of social media as the preferred medium of communication. While ease of access and flexibility (enabled by mobile devices) are cited as reasons, social media is a topic often discussed in enterprise circles. Companies often leverage the medium to reach out to their customers with new products and services. As a natural consequence, the possibility of integrating social media into the regular workflow is being debated. This marks the inception of Enterprise Social Networking.

Enterprise Social Networking (ESN) refers to the use of social media within an organization to connect individuals to enhance the workflow. Typically an ESN environment involves the enterprise intranet and a third party social media platform like Yammer, Chatter and Jive that employees use to interact with each other. The latest entrant into this list is Facebook through its offering—Workplace. The reason behind the excitement surrounding Workplace is the similarity between the two products with regard to user experience. Business leaders hope that the interactive features offered by Workplace would scale up the level of collaboration between individuals, boosting productivity. However, to ascertain whether the popularity of Facebook would be replicated by Workplace, one has to review its various features comprehensively.

WorkPlace and its Features

Workplace—the new enterprise collaboration product by Facebook is said to be designed for workers who have traditionally not used collaboration tools while working. Despite having a desktop version, Workplace is touted as a “mobile-first” application, whose beta version was available in the market for 18 months. Some of Workplace’s features noted by the users are as below:

• The user experience offered by Workplace is similar to that of Facebook with news feeds and chat apps. The “Live” features to support real-time posts and reactions in the form of “likes”, group audio/video calling and trending posts—all of which are typical of Facebook, are found in Workplace. If familiarity aspect clicks with the users, then Workplace is bound to be immensely popular. However, there are differences owing to the fact that Workplace was built to support employee collaboration to drive business objectives rather than mere social interaction.

• In addition to supporting group interactions within a company, Workplace supports interaction and collaboration between employees from multiple companies, provided, they are all members of the Workplace community.

• Unlike Facebook, Workplace is not a self-service product. It is managed entirely by the organization, which control the access to the tools that employees can integrate.

• Workplace does not require employees to sign-up for creating timeline profiles, unlike Facebook. The IT administrators can integrate the user accounts within their enterprise environment to enable Single-Sign-On (SSO) access to the employees.

• In spite of having a desktop application, the mobile-first approach adopted for Workplace, differentiates it from most enterprise collaboration software. The mobile-friendly features of Workplace helps in sharing visual content, driving collaboration between teams.

The early reviews from some of the corporate giants like Heineken and Royal Bank of Scotland that tested the beta version of Workplace have been positive. The platform’s ability to facilitate employees in sharing information useful in maintaining the workflow from anywhere, anytime using mobile devices, has been appreciated by the leaders.

Some of the other features of Workplace have also contributed to the positive reviews from leaders. Deploying Workplace requires very little efforts from the IT teams, which is an advantage. Also, when it comes to the maintenance of the platform, since updates and security are being handled by Facebook, companies have little to worry about maintaining the underlying infrastructure.

While Workplace has given enough reasons to predict a major shift in the way employees collaborate with each other, its beta version did raise few concerns, as acknowledged by the leaders. CIOs are finding it suspicious to deploy Workplace as it could conflict with enterprise policies, which in turn can potentially impact data security. The reason behind this is the concerns revolving around the security of personal data in Facebook. Further, with businesses already having several alternatives for ESN whose usage is still not on par with enterprise applications, organizations have begun to wonder whether deploying Workplace would be significantly beneficial. This is further accentuated by the lack of support for integration of tools used by employees in everyday activities.

Despite all the concerns, a common opinion of industry experts is that Workplace cannot be ignored. In fact, some of the organizations have expressed happiness about the Workplace app, which indicates a promising future for the product. However, organizations would be required to address the concerns pertaining to data security and compliance practices among others. With Facebook already working on addressing the concern over the lack of support for integrating commonly used tools, Workplace is surely finding its way into many companies.