DevOps and its Evolution 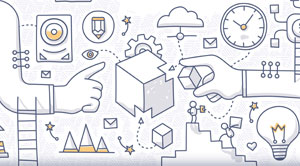 To speed up software delivery, many organizations have succeeded in implementing agile methodologies. Agile has gradually extended into downstream areas such as IT and operations. Teams work very hard to streamline these processes for better feedback and a faster pace of innovation in the IT, which thereby has profound effects on the entire business processes. To grow on this concept, DevOps intention is to create better-quality software with high speed and more reliability, resulting in better communication and collaboration between the teams.

DevOps have evolved from the existing software development strategies, exactly in response to business needs. The traditional waterfall model moved a step ahead to agile development model which was suitable for the frequently changing requirement of the business and faster development goals. With a short release cycle, the teams are able to work on the client feedback quickly, alongside incorporating changes and fixing the bugs for the next release. While the agile approach brings agility to the development process, the operations lacked the agile practices. The synchronization between the developers and the operation engineers slows down the entire development process, thereby postponing the releases. DevOps approach was born out of the need to bring in faster development process along with in-time delivery.

DevOps is a software Development approach that involves Continuous Development, Continuous Testing, Continuous Integration, Continuous Deployment, and Continuous Monitoring of Software throughout the development lifecycle. These activities can successfully be implemented only with DevOps, not agile or waterfall model. To develop high quality software in a short span of time, shorter development cycles help in better results for customer satisfaction.

Automation and Operations at Scale

The software is developed on a continuous basis along the DevOps life cycle where. Unlike in the Waterfall model where the software deliverables are broken down into multiple pieces of short cycles, developed and then delivered in a very less span of time. The stage mainly involves coding and building phases with tools such as Git and SVN for maintaining varied versions of the code.

It is the stage where the developed software is continuously tested for errors. For continuous testing automation tools like Selenium, JUnit are used. The tools lets the QA’s for testing various code-bases thoroughly in order to ensure that there are no flaws in the functionality.

This is the stage where the code supporting new functionality is integrated with the existing code. With continuous development, the code is integrated continuously as well as smoothly with the systems to reflect changes to the end users. The changed code ensures that there are no errors in the environment, allowing to test the changes and to check how it reacts with other changes. Jenkins is one of the very popular tools that are used for Continuous Integration.

Deployment stage is where the code is deployed to the production environment. One can ensure that the code is00 correctly deployed with all servers. If there is any addition of functionality or a new feature then one should be ready to accept greater website traffic. It is the responsibility of the System Admin to scale up the servers to host more users. Since the new code is deployed on a continuous basis, automation tools play a vital role in executing tasks faster and better.

This is a one crucial stage in the DevOps life cycle that is aimed at improving the quality of the software by monitoring the performance. The practice involves the participation of the operations team that monitors the user activity for errors / any improper behavior of the system.

This DevOps cycle is carried out on a continuous basis until the desired result is achieved.