DNA: The Future of Data Storage

DNA: The Future of Data Storage 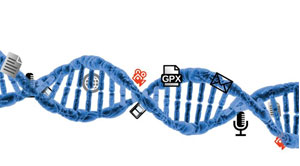 Imagine gigabytes of data comprising several hundred images, videos, and emails—all stored in a tiny strand of DNA. The state-of-the-art concept of storing data on DNA is much closer to becoming a reality. Storing data in large servers occupying immense space has transformed to become invisible to the naked eye through molecular-level data storage.

Unlike magnetic tapes, DNA of the size of a sugar cube is able to accommodate more than what a Walmart-sized data center can. DNA would be cheaper in the long run, than re-recording the data to fresh magnetic tape every half-decade or so, a process that would have to be repeated 120 times over a six-century span.

Microsoft’s research on storage reveals that data across the world will reach 16 zettabytes in 2017 and by 2020, will further rise by 40 zettabytes. Even cloud can only store up to 15 percent of data then. This scenario is urging the need for storing the exponentially growing data via an alternative method; shaping DNA as the ultimate solution for the storage space issue at hand.

Hong Kong’s Chinese University students devised a unique way to store complex data in bacterial DNA that paved a path to save images, videos, music, and text in the molecular level storage system. Later, Harvard University proved that a gram of DNA can store up to 700 TB of data. Researchers at ETH Zurich successfully encoded DNA as encapsulation in silica. The setup was tested under 60 to 70 degree Celsius temperature and data was successfully retrieved using fluoride solution. These researches prove that DNA is an ideal storage system of the future.

The research conducted by Microsoft in collaboration with the University of Washington further solidified that 100 percent error-free data retrieval was possible. They successfully encoded and retrieved pictures, text, and videos without any loss and claimed that 1 gram of DNA can store up to 1 zettabyte of data. These capacities of DNA hold great promise to store the ever-growing data.

Leveraging biotechnology techniques such as Polymerase Chain Reaction (PCR) and DNA sequencing, the DNA can be synthesized to encode and decode images, videos, or any kind of document. DNA contains the genetic information made of nucleotides, represented by letters A, T, G and C—the building blocks of DNA. Similar to leveraging binary numbers (0s and 1s) to convert and store information, data is written using the four nucleotides (ATGC) representing a binary value (A & C = 0, T & G = 1).

Research labs develop strands of synthetic DNA at the pace of one nucleotide block at a time, or even a pair of them. These nucleotides can then be coded and combined to represent numbers, letters and eventually hundreds of bytes of digital information. To retrieve the master data, other advanced technologies and methods help translate those nucleotides.

With the latest developments in the storage landscape, big firms are entering the space to play a huge role in bringing the future storage system nearer. As a part of it, IBM leveraged a combination of nanotechnology and DNA in the production of microchips and for storage development. IBM’s investment on DNA technology is already in transit and is on the road to achieve large-scale DNA storage. On the other hand, Microsoft has a whip hand in DNA storage by acquiring Synthetic DNA from Twist Bioscience, a synthetic DNA manufacturer for digital data storage. In the initial tests conducted by Twist Bioscience, Microsoft evidenced encoding and recovery of 100 percent of the digital data from synthetic DNA. Doug Carmean, an Architect at Microsoft, reveals that they are still years away from developing a commercially-viable product with increased durability and density of data storage on DNA.

According to George Bachand, a Sandia National Laboratories bioengineer at the Center for Integrated Nanotechnologies, the first practical applications for DNA-based storage are for long-term archival purposes. Potentially, such a product could securely store government records, National Archives, research findings at the national labs, and other sensitive classified data.

It is now time to keep an eye on innovative companies that endeavor to achieve a breakthrough in data storage by indulging in researches and bringing a new edge in the storage economy—taking us a step closer to DNA storage systems.