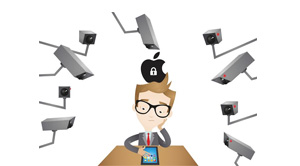 The concept of Bringing Your Own Device (BYOD) to the work is a part of IT consumerization; bringing consumer software and hardware into the enterprise premise. The yearly technological changes in the IT departments have persuaded company employees to use their own devices to access corporate data. Today, in various industries, the whole business in the enterprise, from the origin to the transaction, entirely depends on BYOD.

Smartphones that once lacked the basic data encryption capabilities have matured into better-sandboxed platforms, better than their laptop and desktop counterparts. Among this, Apple or the iOS devices have created a mobile revolution over the years from the first iphone launched in June 29, 2007 until this date, making it the ideal processor for the enterprise BYOD. The Apple devices are the foremost choice for the enterprise users considering their robust security features to keep business data safe. But as the adage goes, “the coin has two sides”, Apple too has got some of the weak spots, which IT companies has to figure out before its implementation.

To keep the devices running efficiently, IT must understand the in and out of the operating system, determine which devices to accept in the workplace and understand the native data protection protocols.

The iOS version in the Apple continue to ameliorate from basic version to the more advanced one; giving top priority to the security. For example, the OS1 of iphone, the first iteration of Apple’s touch centric operating system, simply ran based on Apple’s desktop operating system. The second version of Apple OS2 came with a new concept of App Store. The A7 series of iOS device includes the Secure Enclave coprocessor that uses a secure boot process to verify the operating system and ensures robust iOS data protection.

In keeping with iOS data security, IT should replace older enterprise iphones and ipads at regular intervals. In case of the BYOD, users should also be encouraged to do the same. In addition, IT enterprise should also maintain policy controls to eliminate outdated operating systems and apps.

In the software front, installing Apple software updates as they are released and at the same time advocating employees to do the same is an ideal way for data protection. In fact, keeping the notification on can allow users to get updates instantly though iTunes.

In addition, Enterprise Mobility Management (EMM) tools can give IT a gradual control over data and services. The EMM suites comprises of MDM tools that can assess new devices when connected over the corporate network. IT can leverage enterprise security policies by rejecting the devices that don’t meet the criteria. Apps can further use MDM in automatically installing updates, thus reducing the human effort.

Strengthening iOS encryption can help in strong data protection. Every model of Apple released from the Apple 3GS comes along with an inbuilt advanced AES 256 bit crypto engine and a unique Identifier, specific to each device. The software level can leverage iOS data protection through the hardware and firmware encryption to create eminent level of security. IT using strong encryption can prevent the memory chips from being copied or removed.

The most crucial information and digital contents are stored in our iphone to view and use when necessary. Due to this, a robust protection is indispensable to keep information safe and foster privacy. Apple recently introduced Touch ID, a seamless way to use the fingerprint as a passcode and increased the passcode length to six characters for more convenient usage. IT should also maintain a complex password containing six characters for efficient data protection.

With the widespread mobility, lost devices and malware threats increases the risks for data stored on the devices. To resolve this Apple has taken prominent steps. For example, Apple iOS 8 is enabled with activation lock to strengthen out-of-the-box defense against data breaches and lose of device. IT should also install Find My iphone to locate the devices and take additional actions to recover and keep data safe.

Jailbreaking is the iPhone, iPod touch, iPad and Apple TV hack that allow users to gain access to the entire Unix filesystem. It increases the device vulnerability for malware and other threats. The IT can prevent jailbreaking through frequent monitoring of admins to deter it, and detect it. Keeping apps and devices up to date can also help in defending sensitive data from jailbreaking. The use of Mobile Device Management can further help in detecting jailbroken devices.

• Protect - off the device data

Jailbreaking can only be detected for data, which is within the iphone device; what about the data that are either moved into the iCloud or transferred to other device? The backup in iOS devices are encrypted using a user supplied iTunes password. Ensuring the password that is strong as device passcode helps in maintaining confidentiality. IT should also monitor and make sure that iTunes and iCloud are kept encrypted at all times. Capabilities including VPN on Demand, Per App VPN and Always on VPN can also be to streamline protection in IT.

iOS allows to share data using extensions, which further causes a potential leakage from an enterprise app to a third- party app. In order to eliminate the situation, IT can use EMM tools to protect data flow between apps by configuring Managed Open in rules. IT should also caution users against the authorized access by unapproved accessory devices and also use stringent activation lock on Apple watches.

These are the best practices that provide data protection in IT enterprises through Apple devices and secure the path of BYOD adoption. It is important for organizations to follow a mobile policy that can ensure a better protection against threats or stolen information. IT enterprise should make sure that the practices are well attended in order to leverage data protection.