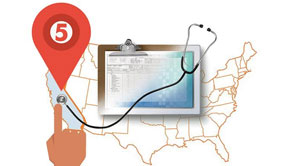 On an average, there are 175 million health related search queries registered per day over the internet in 2016. A little under a decade ago, nine out of ten doctors based in the United States updated entries of their patients’ records manually and used a color coded filing system while storing the same. By 2014 however, 83 percent of physicians across the country were using EHRs, up by a whopping 61 percent on the previous year. This staggering statistic of rapid explosion in health care data has contributed immensely to a healthcare reform culture that has seen heavy investment from healthcare CEOs or CIOs into information technology. If properly structured and analyzed, this digitized healthcare data has the potential to immensely improve the public health sector and deem hospitals and clinics safer.

EHR adoption was a requisite for healthcare reform in the country, and a snapshot of the current healthcare landscape, reveals its importance—

• Medical errors rank third among the leading causes of deaths reported in the US, right after heart disease and cancer (Source: senate.gov)

• Medical errors amount to USD 19.5 billion a year in terms of cost, and the numbers quantify to a staggering USD 1 trillion a year while accounting for lost productivity (Source: senate.gov)

The immense potential that EHRs can provide to better healthcare delivery is sometimes lost in implementation of a technology that many CIOs still don’t completely comprehend. Common are cases of dissatisfaction rising out of confusion that comes with electronic records systems and it threatens to cast an untoward shadow over its numerous advantages. Listed below are some of the common pitfalls that healthcare decision-makers need to avoid while EHR implementation—

Choose an EHR System based on Your Requisites

Choosing the wrong type of EHR remains at the top of the reasons why EHR implementation fails. Various vendors offer various EHRs that offer different functionalities such as electronic charts, e-prescription, as well as integration features with imaging and testing centers. You need to however carefully evaluate which are the functions your organization requires and not get overwhelmed by the options on offer.

Asking for a free-trial, before purchasing from the vendor can be good for testing its functionality within your specified organization with specified needs. If free-trials are unavailable, you could try from your side to learn as much as you can about the product before purchase, and can be done through webinars, video tutorials, or asking a fellow clinician already using the product for his response. Also, decide on the maximum price you or your organization would be willing to pay for the product, and look within the budget.

One smart question to ask your vendor would be, to inquire whether or not a clinician was involved in its making. If a clinician was involved in the development of an EHR, chances are its functionalities will match up to your organization better than ones that didn’t involve clinicians, as working healthcare professionals are more likely to give better insight on healthcare workings than an offbeat coder.

Do Not Rush Implementation

Much like adoption of any new technology within an organization, getting off to a good start remains imperative for EHR as well. It doesn’t matter how close the deadlines for meeting Meaningful Use certification is, or even if the vendors apparently charge inflated hourly rates for installation, it is better take your time to make sure all the users are satisfied with the EHR and its workflow as it would cost considerably more to go offline and replace a faulty system later. A smooth transition also depends on the level of requisite training for your organization and staff before going live.

The Meaningful Use Conundrum

A very important point to remember is that an EHR bearing a Meaningful Use certification is no definite indication that it will suit the needs of your practice or hospital. The quality of care delivered to patients and the happiness of its end-users should bear consideration too.

One of the biggest complaints rising out of EHR usage from hospital staffs, nurses and physicians is the tediousness of some data entry features in EHR systems. In some cases, the same data must be entered numerous times, whilst some have automatically generated notes that are largely irrelevant to patient progress.

Looking for a vendor that provides a template or a macro-based EHR allows providers to fully customize the templates used can help alleviate these pains.

While debating whether to go for a predominantly in-house or a cloud-based solution, decision-makers should take a note on the massive advantages of cloud-based systems including but not limited to—

• The software is always up to date

• The system remains in function and no data is lost, in case of a disaster and offers better support

According to a recent survey by Black Book Ranking, 89 percent of practitioners reported using smartphones or tablets to communicate with their staff, but as of 2014, only one-third of EHR providers delivered a mobile-optimized product. (Source: epocrates.com) But, perhaps the most revealing statistic for the need of mobility is shown by a research that states 58 percent of users who use their EHR on their tablet or smartphone reported to being satisfied with their solution, while only 28 percent of the users who couldn’t felt sated. (Source: softwareadvice.com)

The demand for anytime, anywhere access to EHR systems on the hospital wireless network is on a constant upturn. This demand in the near future is going to result in some innovations, and checking for mobile-ready access from vendors should be a key precursor for CIOs while making an informed decision.

Do Not Undermine Security Features

A recent survey by Healthcare Dive revealed that data breaches in Healthcare Institutions average an estimated total of USD 3.8 million in 2016, a number that has risen significantly by 23 percent since 2013. The study also further estimated the average global per capita cost of a stolen healthcare record to be USD 363, deeming it the most expensive industry worldwide for a breach. Reports show that 4.5 million health records were reported as ‘hacked’ at the UCLA Medical Center alone in 2015.

Patient data contains highly sensitive patient information, and that makes it valuable to hackers. Thus, it is essential that hospitals and clinics consider the security features of an EHR system to safeguard patient data. Ensuring compliance with The Health Insurance Portability and Accountability Act (HIPAA) guidelines should also be a prerequisite.