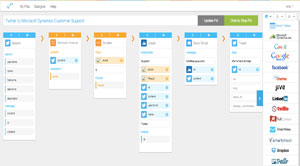 “The proliferation of SaaS and application programming interface economy has highlighted the need for a tool that can easily pull together processes from multiple applications to serve various scenarios,” says Hasija, Founder and CEO, Azuqua. He intends to make the automation process very user-friendly unlike many existing cloud integration services that require a computer science degree to exploit it.

Currently focusing on connecting sales, service and marketing applications, the company’s platform called ‘Flõ’ will be initiated on the occurrence of a triggering event, which can be the creation of a Salesforce record or a mention on Facebook or Twitter. The company also provides the means to use math, time and logical rules to take control of the automation, increasing productivity and efficiency.

The 15 applications now supported include Salseforce.com, LinkedIn, Dynamics CRM and Twitter; according to Hasija, 15 more applications are currently being tested.